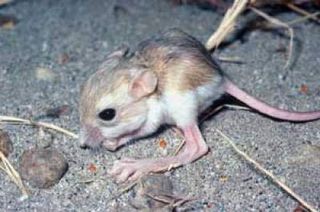 A twenty-seven day old desert kangaroo rat, Dipdomys deserti, learning how to use its cheek pouches to store food.
(Image: © Mark A. Chappell)

It doesn't lie or cheat, but one desert animal has no problem stealing from its unwitting neighbors.

The pocket mouse, a tiny nocturnal rodent, survives by sneaking into neighbors' dens and pinching seeds from their food stores, according to a study in this month's issue of the American Naturalist.

"We might think of premeditated stealing as something uniquely human, but this shows it also exists in certain species," said study leader Mary Price, a researcher at the University of California, Riverside and the University of Arizona.

Before she made the discovery, Price, who spent more than 20 years studying desert rodent communities, couldn't understand how several rodent species co-existed in an area with scant resources and yet none out-competed the others.

It turns out some weren't playing fair.

Pocket mice steal from their bigger, faster cousins, the kangaroo rats, which are very good at bounding around on their hind legs and gathering seeds. After the plants have dropped all their seeds and the frenzied scramble for them is over, the kangaroo rats store what they've collected in caches, from which they feed the rest of the year.

The tiny pocket mice are expert at finding and making off with stored seeds.

This kind of parasitic relationship has been observed in just a few other animal communities, though Price says she suspects it might be more widespread. She hopes the new research will help scientists understand similar interactions among other animals. She also sees a broader application of the finding.

"We can't conserve biodiversity if we don't understand the processes that maintain it," she said.