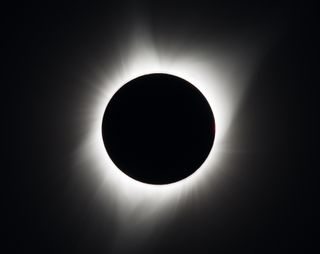 A small plane carrying four people who were returning from an eclipse-watching trip crashed just short of an airport in northern California.

No one was hurt in the crash, which occurred Monday evening (Aug. 21) about a mile short of an airport in Byron, California (a town about 60 miles, or 96 kilometers, east of San Francisco), according to The Mercury News.

The pilot and three passengers were returning to the Bay Area after viewing the solar eclipse in Oregon on Monday, The Mercury News said.

The plane began to experience problems on the return trip; the pilot tried to make an emergency landing at the airport, but the plane landed in an irrigation pond close to the airport.

Officials are still investigating the cause of the crash, but it may have been a fuel shortage on the plane.

Small planes were popular vehicles for traveling to watch Monday's solar eclipse. An airport in Madras, Oregon — a hotspot for watching the eclipse — typically gets three flights arriving per hour. But in the days leading up to the eclipse, the airport was getting one flight arriving every 3 minutes, according to CBS News. On Saturday, Aug. 19, a small plane crashed en route to Madras, killing one person.