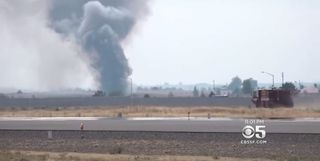 A small plane crashed near the town of Madras, Oregon, a popular spot to watch the Great American Total Solar Eclipse. This screengrab shows smoke from a brush fire sparked by the crash.
(Image: © CBS SF Bay Area/YouTube)

A small plane en route to Madras, Oregon — a hotspot for eclipse watching — crashed on Saturday, killing one person.

The plane was about a mile south of the Madras airport when it went down in a canyon around 1:50 p.m. on Aug. 19, according to KTVZ, a local news station in Oregon. The crash sparked a small brush fire that was soon brought under control.

Officials originally said there were two people aboard the plane but later confirmed that there was just one person, the pilot, who did not survive the crash.

Officials did not release the name of the pilot, but the plane appears to have been registered to a man from Menlo Park, California. It took off from an airport in San Carlos, a city about 25 miles (40 kilometers) south of San Francisco, according to KPIX, a news station in San Francisco.

It's not clear whether the pilot was visiting Madras to view the solar eclipse. But the city's airport has seen a large increase in air traffic due to people visiting the town for the eclipse — the airport typically gets three flights arriving per hour, but in the days leading up to the eclipse, the airport was getting one flight arriving every 3 minutes, according to CBS News.

The airport also does not typically have an air traffic control tower, but a mobile tower was brought to handle all of the extra traffic for the eclipse. In total, about 400 planes were expected to arrive at the airport in advance of the eclipse today (Aug. 21), according to KTVZ.