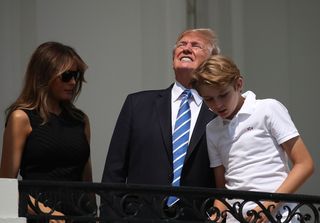 President Trump looks up at the solar eclipse without protective glasses on Aug. 21.
(Image: © Mark Wilson/Getty)

Even the president of the United States couldn't look away from the Great American Solar Eclipse.

But on Monday afternoon (Aug. 21), President Donald Trump was spotted breaking the cardinal rule of eclipse viewing: Don't look at the sun without eye protection. For a brief moment, Trump took off his eclipse glasses and stared straight into the sun — even as an aide shouted, "Don't look," according to Ted Mann, a reporter for the Wall Street Journal.

Should the president be worried about his eyesight? [Photos: 2017 Great American Solar Eclipse]

"Staring directly at the sun for a few seconds without eye protection at any time … can cause damage to the center of the retina," said Dr. Neil Bressler, a professor of ophthalmology at The Johns Hopkins University School of Medicine. That includes a partial eclipse, as well as when there's no eclipse at all, Bressler added.

"There's no absolute cutoff regarding a safe amount of time for any individual [to stare at the sun], but the longer one stares directly at the sun, the greater the chance of damage to the retina," Bressler told Live Science.

Indeed, "even a few seconds of such viewing can temporarily or permanently burn the center of the retina," according to a short piece in the journal JAMA published Aug. 18. Bressler was the senior author of the piece. "Once retina tissue is destroyed, like brain tissue, it cannot regenerate, resulting in permanent central vision loss … if vision loss has occurred after viewing a solar eclipse, one should promptly see an ophthalmologist, an eye doctor who can recognize the symptoms and signs of solar burns to the retina," the piece said.

Looking directly at the sun can lead to a condition called solar retinopathy. The damage occurs because the lens of the eye focuses the sun's rays on a single point at the back of the eye, called the fovea. The fovea is a spot in the retina that's responsible for sharp, central vision — if it's damaged, it can lead to blurry vision or, in more severe cases, a central blind spot in the eye, according to the American Academy of Ophthalmology (AAO).

But Trump's glance at the mesmerizing eclipse wouldn't cause him to lose his vision entirely.

It's unlikely that a person would become totally blind from looking at the sun, Dr. Russell Van Gelder, a clinical spokesman for the AAO and director of the University of Washington Medicine Eye Institute in Seattle, told Live Science in July. (Total blindness refers to the loss of both a person's central and peripheral vision.) Instead, only a person's central vision is typically affected by solar retinopathy, he said.

Still, in theory, a person could become legally blind — vision of 20/200 or worse — from staring at the sun.

REMEMBER: Looking directly at the sun, even when it is partially covered by the moon, can cause serious eye damage or blindness. NEVER look at a partial solar eclipse without proper eye protection. Our sister site Space.com has a complete guide for how to view an eclipse safely.

With additional reporting by Laura Geggel.