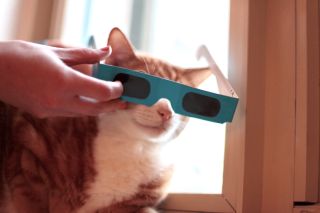 If you have plans to watch the total solar eclipse that will cross the United States on Aug. 21, you likely have a long checklist of things to do. For example, you'll want to buy special protective eyewear and plan a way to beat traffic as hordes of people travel toward the path of totality.

But should that checklist include securing protective glasses for your pets?

Animals will probably be fine, as they don't tend to look directly at the sun. But it doesn't hurt to be safe and protect cats, dogs and other pets during the eclipse, according to astronomy experts. [Video: How to Make a Solar Eclipse Viewer]

During the Great American Total Solar Eclipse on Aug. 21, 2017, the moon will pass between Earth and the sun, casting its lunar shadow across a path that extends from Oregon to South Carolina. As the moon's shadow begins to block the sun's light, parts of the sun's fiery disk will continue to be visible, and can literally burn any eyes — human or otherwise — directed at it.

This condition, commonly known as eclipse blindness, happens when the sun's powerful rays burn sensitive photoreceptor cells in the retina. "I have seen instances where the patient has eventually shown up with crescents burned into the back of the eye, and you can almost tell exactly when they looked," Ralph Chou, professor emeritus at the School of Optometry & Vision Science at the University of Waterloo in Canada, told Space.com, a sister site of Live Science.

Eclipse watchers can remove their protective eyewear only when the sun is completely hidden by the moon. For that to happen, skywatchers must be in the 70-mile-wide (112 kilometers) path of totality, and even then, totality lasts only up to 2 minutes and 40 seconds depending on the location, according to NASA.

But because pet owners can't exactly ask their pets to follow these rules, it's best to outfit them with protective glasses, Mike Reynolds, an astronomy professor at Florida State College in Jacksonville, Florida, said at the Northeast Astronomy Forum in April.

"Safe solar viewing is always a must, no matter who it is," Reynolds said, showing a photo of a dog wearing protective glasses.

But other experts said there was no need to worry.

"On a normal day, your pets don't try to look at the sun, and therefore don't damage their eyes.  And on this day, they're not going to do it, either," Angela Speck, director of astronomy and a professor of astrophysics at the University of Missouri, said at a news conference with NASA on June 21 in Washington, D.C.

"It's not a concern, letting them [pets] outside," Speck said. "I'm not going to worry about my cat."

However, Speck noted that the eclipse might affect the behavior of certain animals. For instance, as the sky darkens, farm animals such as cattle may think nighttime is approaching and thus may decide to head back to the barn, she said.

In addition, insects and frogs might start chirping, just as they do during dusk on summer nights. Birds may also be fooled into thinking it's nightfall, and may start "making lots of noise [to] show you that they're getting ready to go to bed," Speck said. [Sleep Tight! Snoozing Animals Gallery]

Even certain plants may furl or unfurl, just as they regularly do as darkness falls, she said.

Speck said astronomers and citizen scientists can help collect information to see how the natural world, especially wildlife, reacts to the solar eclipse.

"The nighttime comes so fast, and I don't think we have good data on this, so it's actually going to be really interesting to see what happens," Speck said.