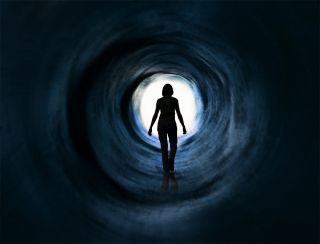 About 10 percent of the general population has had an out-of-body experience at some point in their lives.
(Image: © Mangojuicy/Dreamstime)

While driving and accelerating in his car, a man in France suddenly had a bizarre sensation: He felt like he was outside his car, looking in at his physical self, which was still at the wheel.

The man was part of a new study that links problems of the inner ear with eerie "out-of-body" experiences. These experiences are curious, usually brief sensations in which a person's consciousness seems to exit the body and then view the body from the outside.

The study analyzed 210 patients who had visited their doctors with so-called vestibular disorders. The vestibular system, which is made up of several structures in the inner ear, provides the body with a sense of balance and spatial orientation. Problems with this system can cause dizziness or a floating sensation, among other symptoms. [7 Weird Facts About Balance]

Maya Elzière, an ear, nose and throat specialist at Hôpital Européen in Marseille, France, and co-author of the study, enlisted patients who had experienced a range of issues, from recurrent vertigo and tinnitus to infections in the ear. Among these patients, 14 percent reported out-of-body experiences, compared with only 5 percent of healthy people without vestibular disorders who said the same.

"Out-of-body experiences were about three times more frequent" in patients with vestibular disorders, versus those without these disorders, said Christophe Lopez, lead author of the study and a neuroscientist at Aix-Marseille Université in France.

Lopez said the example of the patient who felt like he was outside his body while accelerating in his car makes sense. The scientist explained that since the vestibular system would be responsible for orienting the driver and giving him the sensation of moving forward as he accelerated in a car, a faulty vestibular system could send crossed signals to the brain during the motion.

"If you are sending the wrong signals to your brain about your motion, it creates confusion — your brain has to make sense of conflicting information," Lopez told Live Science. "We think the conflicting signals create a kind of central incoherence, and that creates distortions in the sense of your body and the environment around you." [Top 10 Unexplained Phenomena]

Among the 29 patients in the study who reported experiencing out-of-body sensations, one described it as a "sensation of entering my body, like in an envelope, from the top." Another said, "I saw myself, smaller, from the top."

The research also found that most patients reported they had out-of-body sensations only after they had experienced dizziness for the first time. This suggests, Lopez said, that problems with the vestibular system were a factor in creating the odd sensations.

Out-of-body experiences have been documented for centuries, at least since the late 1800s. One case, recorded by French otologist Pierre Bonnier in 1905, describes a patient who felt "divided into two persons, one who had not changed posture and another new person on his right, looking somewhat outwardly. Then, the two somatic individuals approached each other, merged, and the vertigo disappeared."

Lopez said that doctors have commonly ascribed the sensation to a kind of psychosis. But the new study builds on other recent research that links the feeling, at least in some cases, to faulty wiring in the vestibular system, he said.

"What the authors of [this study] did is carefully quantify the incidence of vestibular sensations and their relation to symptoms traditionally labeled 'psychiatric,'" Peter Brugger, a psychologist at the University of Zurich in Switzerland, told Live Science. Brugger has studied similarly bizarre sensations of people seeing themselves, or their doppelgängers, before them.

Lopez said he was inspired to conduct his research after working in the lab of Olaf Blanke, a neuroscientist at Ecole Polytechnique Fédérale de Lausanne in Switzerland.

In 2002, Blanke showed that he could induce out-of-body sensations in a patient by electrically stimulating the brain area that integrates vestibular and visual input.

Terence Hines, a professor of psychology at Pace University in New York and author of the book "Pseudoscience and the Paranormal" (Prometheus Books, 2003), told Live Science that the new study makes sense given the role of the vestibular system in the human body.

"I don't think it's the only explanation for out-of-body experiences," Hines said. "But we know that this part of the inner ear plays a role in how we orient ourselves in our bodies, so if something is wrong there, things can go kind of haywire. It's one reasonable explanation."

Other factors have indeed been linked to out-of-body sensations. A personal history of migraines, anxiety and depression have also been associated with more frequent reports of the sensation, according to the recent study. Other research, led by psychologist Andra Smith at the University of Ottawa in Canada, describes the case of a woman who could deliberately trigger an out-of-body sensation, suggesting that it may be possible to do so through meditation.

Also, Lopez said it is common to experience "floating" or "sinking" sensations while falling asleep, dreaming or waking.

"In terms of neurophysiology, it's unclear why that happens," Lopez said. He excluded occurrences around sleep from his study, because they're not necessarily associated with a faulty vestibular system. He also excluded any sensations associated with drug or alcohol use.

Lopez said that while a faulty vestibular system is "not the only explanation for out-of-body experiences," it might be reassuring to some to know that a mechanical explanation could be at play.

"Having an out-of-body experience may happen because one of the main sensory systems is not processing correctly," he said. "It doesn't mean you're crazy."

The study was published online June 8 in the journal Cortex.