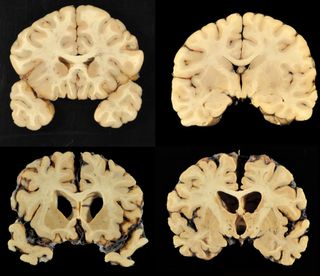 A study of the brains of more than 200 deceased football players — including 111 who played in the National Football League (NFL) — reveals that nearly 90 percent of the players had a brain disease called chronic traumatic encephalopathy (CTE).

CTE is likely caused by repeated blows to the head, according to the Mayo Clinic. People with the condition get worse over time and can develop symptoms such as learning difficulties, memory loss and depression.

But CTE can be definitively diagnosed only after a person has died, during an examination of the person's brain, according to researchers at Boston University's CTE Center, who conducted the new study. [Images: Brains with CTE]

In the study, published today (July 25) in the journal JAMA, researchers found evidence of CTE in 177 out of 202 brains, or 87 percent of the individuals. Among the brains of NFL players, 110 out of 111, or 99 percent, had CTE. (The other men who had donated their brains for the study played football either semiprofessionally, or in college or high school.)

CTE ranges in severity from mild to severe. Among the former NFL players in the study, the disease was "frequently severe," the researchers found, with 71 percent of these players having severe CTE.

To learn about the symptoms the players may have had before they died, the researchers interviewed people close to the players, such as spouses or adult children. These interviews were completed for 111 of the donors in the study.

Interviews with people close to the men also revealed that nearly all of the players' cases of CTE were progressive, meaning that their conditions got worse over time, the study said. However, the researchers noted that they could not confirm that the disease was progressive based only on examining the players' brains, as this provided only a snapshot in time of the disease.

The donor brains in the study came from players who played a wide range of positions on the field, including lineman, quarterback and kicker. (Different positions come with different likelihoods of being tackled.) Donors had played football for 15 years, on average.

Overall, the findings suggest that CTE "may be related to prior participation in football," the researchers wrote in the study.

The researchers noted that the study had limitations. For example, the researchers said, donors in the study and their families may have made the decision to donate because they were aware of CTE and thought the players may have had symptoms of the disease.