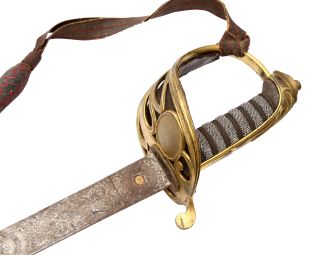 In March, Anne Bentley, curator of art and artifacts at the Massachusetts Historical Society, received a pivotal text from her boss: "The sword is in the house."

Bentley rushed to the table where the weapon was laid out, but she didn't need to look closely. From even about 5 feet (1.5 meters) away, she said to her boss, "'Brenda, this is the sword.' It's got an aura," Bentley told Live Science. "You just know."

The sword in question belonged to Col. Robert Gould Shaw, head of the 54th Massachusetts Volunteer Infantry Regiment, the first Civil War unit in the North made up of African-American soldiers from the U.S. and Canada. The historic weapon was recently donated to the Massachusetts Historical Society. [10 Epic Battles that Changed History]

"I'm retiring next year, and bar none, after 44 years at the Mass[achusetts] Historical Society, this is the most significant item that's crossed my desk, as an artifact," Bentley said.

Dennis Fiori, president of the Massachusetts Historical Society, called it a "remarkable discovery," and said the artifact is "the holy grail of Civil War swords."

The artifact is more than just a sword. It also served as a beacon that the 54th Regiment followed into the July 18, 1863, assault on Fort Wagner, in South Carolina — the gleaming blade pointed the soldiers' way through the smoky chaos of battle. What's more, the sword stands as a symbol for the crucial role African-American soldiers played in helping the Union win the war. Even Abraham Lincoln, although initially opposed to allowing African-American men to enlist, acknowledged after the Civil War that the Union's victory hinged on the support of African-American soldiers.

But the sword has been something of an elusive prize after changing hands many times across generations. When Shaw died from a shot to the chest at the Fort Wagner battle, his sword was confiscated by the Confederate army. It then disappeared until the end of the war, two years later, when the Union Army Gen. Charles Jackson Paine got a tip about the sword, Bentley told Live Science.

In 1865, Paine had paused in front of a house for lunch with his brigade on his way to Goldsboro, North Carolina, where he was stationed. Someone came out to see if any of the African-American soldiers had been with Shaw at Fort Wagner. Shaw's sword from that battle, the unnamed person said, was in a neighboring house of a former Confederate officer.

Once Paine arrived in Goldsboro, he sent a group of soldiers to the house to collect the sword. Thankfully for the Shaw family, when the soldiers arrived, only the servants were home. The servants allowed the men into the house, and they found the sword and returned it to Paine, who, in turn, sent it to Shaw's parents in New York, said Bentley.

The sword was then passed down through the generations from Shaw's sister, traveling in boxes from attic to attic. In 2013, Shaw's descendants, siblings Robert Shaw and Mary Minturn Wood, donated what they thought was the colonel's Fort Wagner sword to the Massachusetts Historical Society.

But it was the wrong sword. That sword was the one Col. Shaw used in the 2nd Regiment Massachusetts Volunteer Infantry at the Battle of Antietam, according toBentley. It turned out, however, that this mistake led Bentley to explain the Fort Wagner sword's distinguishing characteristics: It was an English sword with Shaw's initials — RGS — on the blade. The sword the siblings donated was an American sword and was missing the initials.

Fast-forward to this year, when Shaw and Wood were preparing to sell their parents' retirement house in Hamilton, Massachusetts. They collected the last items from the attic and laid out on the kitchen table the five swords the family had from other generations of family members, when, according to Bentley, one of the swords caught Wood's eye.

It didn't have a scabbard, and it looked particularly old. Wood and her brother's moment of discovery came when, with the help of a magnifying glass, they were able to read the rusted-over initials: RGS.

"This one's not going to the tag sale," Wood joked, according to Bentley.

The historic sword went on public display at the Massachusetts Historical Society on July 18, exactly 154 years after Shaw used it to guide soldiers through the historic battle at Fort Wagner.