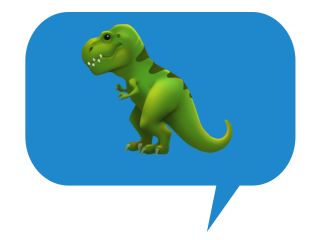 Apple's new green-and-toothy Tyrannosaurus rex emoji may be cute, but its anatomy is wildly inaccurate, a paleontologist told Live Science.

For starters, its lower teeth shouldn't be visible, and its ear and nostril are in the wrong places, said Thomas Carr, a vertebrate paleontologist and an associate professor of biology at Carthage College in Wisconsin.

Carr noted several problems with Apple's new dinosaur emoji, which the company previewed on World Emoji Day (July 17) and plans to make available to users later this year, along with several other new emojis, such as a zombie and a "mind-blown" face. Carr listed a half dozen ways the T. rex emoji is imprecise:

When asked whether he'd use the T. rex emoji, Carr did not mince his words.

"Unfortunately, not this version," Carr told Live Science in an email. "I'd use an accurate avatar."

Rather, he'd like to see "basic anatomical accuracy, especially skull shape, which lends the animals much of their identity and personality."

This is Apple's first dinosaur emoji, if you don't count the birds, which evolved from dinosaurs and are technically considered living dinosaurs.

But Apple might have gotten at least one thing right: It didn't give T. rex lips, as some researchers (most likely inaccurately) suggested the mega-beast sported. (In fact, Carr and colleagues' D. horneri finding suggested that T. rex likely didn't pucker up.)

The new emoji is also a step up from Barney, the purple T. rex that has entertained children on television for years.

"The lesson here is that it isn't hard to get dinosaurs right — it just requires a bit of attention and expert input to draft a stylized, but accurate, icon," Carr said. He added that if Apple is looking for dinosaur emoji suggestions, the 75-million-year-old Daspletosaurus horneri would be a fearsome pick.

Apple did not immediately respond to comment about the accuracy of its T. rex, but Live Science will update the story if the company replies.