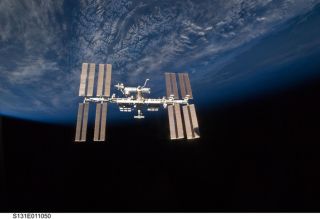 The International Space Station as seen in a photo taken in 2010.
(Image: © NASA)

Chemical weapons such as sarin gas and VX nerve gas can have horrifying effects on the human body, but now, scientists are hoping to develop better treatments for nerve-gas poisoning by sending their experiments into space.

Recently, researchers at the National Institutes of Health's Countermeasures Against Chemical Threats program sent materials for their experiments to the International Space Station.

Why outer space? It's all about gravity: On Earth, gravity poses a challenge to producing the specific type of molecules these scientists need for their experiments. But in space, where gravity is much weaker, these molecules can be produced more easily.

Specifically, the researchers are studying the structure of an enzyme called acetylcholinesterase (AChE), which helps muscles in the body relax after they have been stimulated. Nerve agents, including sarin and VX, block the activity of this enzyme, which prevents the muscles from relaxing and leads to paralysis and death. [5 Lethal Chemical Warfare Agents]

To develop better antidotes to these chemical weapons, researchers need a detailed view of the structure of the AChE enzyme, and one way to get such a view is by growing crystals of the enzyme in lab dishes. But on Earth, gravity can interfere with the growth of these crystals, and keep them small.

"By taking advantage of the microgravity conditions of the International Space Station, we hope to grow better, more uniform crystals that we are unable to grow on Earth," study researcher Andrey Kovalevsky, of Oak Ridge National Laboratory in Tennessee, said in a statement.

Once the crystals on the space station grow large enough, they will be returned to Earth, and the researchers will analyze them with a sophisticated imaging technique called neutron diffraction. This method will show them the atomic structure of the enzyme.

"Using this technique, we will be able to get a closer look at how the enzyme interacts with pesticides and nerve agents, and learn about how the bond between the two can be chemically reversed," said study researcher Zoran Radić, a professor of pharmaceutical sciences at the University of California, San Diego. "This method would not work on the smaller enzyme crystals that can be grown here."

Current antidotes to nerve gas work by breaking the chemical bond between AChE and the nerve-poisoning agent, but they do this too slowly to be fully effective, the researchers said. The new project aims to develop antidotes that break this bond more quickly.