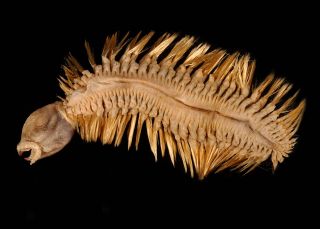 If Tim Burton designed holiday ornaments, they might look something like this bristle worm.
(Image: © National Museum of Natural History, Smithsonian Institution)

An 8-inch-long marine worm that lives in the waters near Antarctica has an oval body ringed with shiny golden bristles and topped with a sharp-toothed maw. It somewhat resembles a decoration for the Christmas season — if holiday ornaments included bulbous, extendable throats tipped with pointy teeth.

The unusual creature is Eulagisca gigantea, and though it recently circulated online in photos that appeared on social media, it is more frequently found in the Southern Ocean waters, near Antarctica.

E. gigantea belongs to a class of marine worms called polychaetes, also known as bristle worms (their name means "many bristles" in Latin). The group's bristles can have a range of uses — swimming, crawling along the ocean floor, or even for defense, according to the Monterey Bay Aquarium Research Institute (MBARI). [In Photos: Weird Bristle Worm Calls Antarctica Home]

Little is known about the habits and biology of this peculiar worm, which was first discovered in 1939, the World Register of Marine Species reported. What appears to be a "head" in images is actually a retractable pharynx that is generally housed within its body, as in other polychaete marine worms. When the animal feeds, this section of its throat — tipped by its jaws — extends outward, to a length of about 2 inches (5 centimeters), according to a photo in the Smithsonian Museum of Natural History's collection.

And its sharp teeth suggest that it preys on other animals or scavenges their remains, the marine biology blog Deep Sea News reported in 2012. A photo shared in a July 7 Facebook post shows a specimen with extruded jaws that was found in the Antarctic Ocean at a depth of 1,706 to 2,198 feet (520 to 670 meters) and highlights the brilliant golden color of its bristles.

This giant-scale worm, which belongs to a species called Eulagisca gigantean and a family called Polynoidae, was found in the Antarctic Ocean at the depth of 520-670 m (1706-2198 ft). (Credit: JC Mendoza/NMNH)

Polychaete worms represent a range of sizes and colors and are distributed across a variety of habitats — from extreme environments like hydrothermal vents to shallow tide pools and coral reefs, MBARI reported. Scientists have thus far described 80 families and 8,000 species of polychaete worms, but there may be many more, according to MBARI.

In fact, researchers recently used DNA analyses to estimate that there could be more than twice as many marine worm species in the oceans than previously suspected, scientists reported in a study published November 2016 in the journal Royal Society Open Science. E. gigantea and other bizarre marine worms may be strange to our eyes, but they likely play a vital role in ocean ecosystems, and may inform scientists' understanding of life in the deep ocean, the researchers wrote in the study.