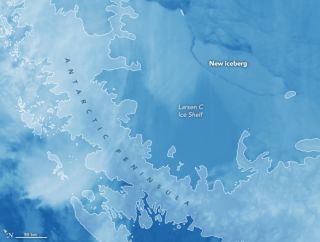 This baby's a behemoth: At approximately 2,200 square miles (5,800 square kilometers), the iceberg represents about 10 percent of the Larsen C ice shelf, which it was a part of until it broke off this week. The 'berg is slightly bigger than Delaware in area and similarly proportioned: While the Blue Hen State is 96 miles (154 km) long, the Larsen C iceberg measures about 99 miles (159 km) from end to end, meaning it would take a little over an hour and a half to traverse it by car, assuming you had a car that could manage 60 mph (nearly 100 km/h) on uneven, floating sea ice. [In Photos: Antarctica's Larsen C Ice Shelf Through Time]

An instrument aboard NASA's Aqua satellite snapped one of the first images of this new iceberg on July 12, 2017, using thermal measurements to distinguish between ice and open water. The image shows the iceberg floating between the rest of the Larsen C ice shelf off the Antarctic Peninsula and the fractured sea ice floating on the Weddell Sea.

The rift that led to the iceberg's calving has existed since the 1960s, according to NASA, but it didn't start growing until 2014. Scientists have been monitoring the crack closely since then. By April 2017, only 10 miles (16 km) of ice connected the iceberg to the main ice sheet, according to the U.K.-based research group Project MIDAS. In late June, the same group reported that the speed of the ice was increasing to levels never before measured on Larsen C, indicating an imminent calving event.

The final break occurred sometime between July 10 and July 12. The ice that broke away weighs more than 1.1 trillion tons (1 trillion metric tons), but it won't substantially affect sea levels on its own, as it was already floating. The Larsen C ice shelf has now retreated farther back than at any time in recorded history, according to Project MIDAS glaciologist Martin O'Leary of Swansea University; the loss of the iceberg could make the shelf vulnerable to collapse. A collapse of the shelf would have an impact on sea levels, as land-based ice on the Antarctic continent would have a clearer route to the sea. However, scientists aren't yet sure what the future holds for Larsen C.

"In the ensuing months and years, the ice shelf could either gradually regrow, or may suffer further calving events which may eventually lead to collapse — opinions in the scientific community are divided," Swansea University glaciologist Adrian Luckman said in a statement. "Our models say it will be less stable, but any future collapse remains years or decades away."