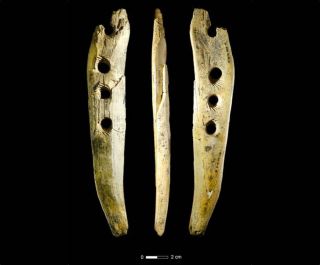 At first glance, the discovery in Germany's Hohle Fels cave looked like it could be the mock-up for a 42,000-year-old set of brass knuckles: four carefully carved small holes placed close together on an 8-inch-long (20 centimeters) strip of mammoth ivory.

But the Hohle Fels cave dwellers had neither brass nor the know-how to make it. Also, the inner surfaces of the holes were intricately carved in a spiral pattern, like the rifling inside a modern gun barrel. [Top 10 Mysteries of the First Humans]

"These people were interested in making these perfect forms," said Nicholas Conard, an archaeologist at the University of Tuebingen, who helped to discover the ivory.

Conard and his multinational team said they may have found the earliest evidence of human rope-making. In the study, Veerle Rots, of Belgium's University of Liege, an expert in scientific analysis of Paleolithic materials, fed raw fibers through the rifled holes in a bronze replica of the ivory artifact to create four separate twisted strands. Subsequent experiments reinforced the initial results.

This is because figuring out how humanity's ancestors lived is a two-sided conundrum, and scientists usually have only one side of the evidence. Stone and bone tools survive, said University of Tulsa archaeologist Danielle Macdonald, a materials analyst who did not participate in the Hohle Fels discovery, but hides, wood, fibers and foods — the materials worked by the tools — do not.

"There is never a stand-alone object," MacDonald added. "We look at the microscopic records of wear and tear on stone and bone materials, and make inferences of what people were doing with them."

Hohle Fels, in the Ach Valley of southwestern Germany, is a rich source of human prehistory, best known for artifacts made by the first modern humans in Europe, around 42,000 years ago.

The mammoth ivory tool was found 50 feet (15 meters) inside a narrow tunnel leading to the Hohle Fels amphitheater — "protected from the weather but with enough daylight to make it easy to work," Conard said. The team found the four-holed mammoth ivory tool in 15 "little broken pieces, crushed in place and beautifully preserved," Conard added.

Initially, the scientists interpreted the find as artwork, but archaeologists had never found anything that remotely resembled the ivory piece, the researchers said. Instead, the rifling, etched in the bone with incredible care, suggested a practical use: fiber forced through the holes could produce four strands of rope with a right-hand twist that could in turn be fashioned into a larger rope, the study said. Using a bronze casting of the artifact (it is illegal to take such objects out of Germany), Rots and her Liege staff made 10 feet (3 m) of rope in 15 minutes.

Yet, although "rope seems the most likely product, they may [also] have been winding fibers to make mats," Conard said. "We're not ruling that out." The team published preliminary results last July in the German journal Archaologische Ausgrabungen Baden-Wurttemberg. Conard said the team is testing different materials over the course of a full year to see whether the tool proves effective for all seasons.

The Liege researchers used cattails, common, reedy wetlands plants, "but it seems you can use inner [tree] bark or any plant with long fibers," Conard said. Each of the fibers is about 3 feet (about 1 m) long, and "you wind the next one into the previous one," he said. "They shoot out the other side like large strands of spaghetti."