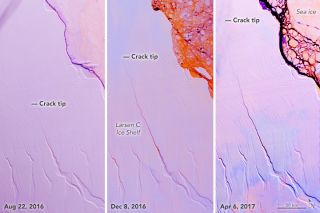 The satellite images not only capture the crack's length, but also the "texture" of the ice shelf with smooth ice depicted as blue and rougher areas — like the rift and open water — as orange.
(Image: © Jesse Allen/NASA Earth Observatory)

NASA satellite images spotted a massive iceberg set to break free from a cracking ice shelf in Antarctica, and scientists are trying to predict when the dramatic calving incident will occur.

Since 2014, scientists have been monitoring Antarctica's Larsen C Ice Shelf and the crack that cuts across the slab of floating ice. The crack currently measures about 112 miles (180 kilometers) long, but when it reaches the ocean, an iceberg about the size of Rhode Island will break from the ice shelf, according to NASA. As of this month, only 10 miles (16 km) of ice is left between the end of the crack and the open sea, agency officials said.

Ice fracturing is caused by a number of factors, so scientists can't quite pinpoint when the iceberg will break off: It might be days from now, or it could take years, according to researchers from Project MIDAS, a United Kingdom-based group that studies the cracking ice. [Images of Melt: Earth's Vanishing Ice]

In addition to capturing the crack's length, the Multi-angle Imaging SpectroRadiometer (MISR) instrument aboard the Terra satellite records the "texture" of the ice shelf by combining the photos taken by backward-, vertical- and forward-pointing cameras into one image. False-color composites of these different angles show the mostly smooth ice shelf's surface (blue) and the rougher areas of the crack and open water (orange). The crack's rougher surface is a sign of its active growth, according to NASA.

When the crack reaches the ocean and the iceberg breaks away — an event known as calving — it could lead to "the complete disintegration of the ice shelf," NASA officials said. Though calving is a routine process for ice shelves, the massive shelf of floating ice helps keep land-based glaciers in place. If the shelf deteriorates, the glacier's flow toward the ocean can accelerate and lead to sea-level rise.

The collapse of Larsen C and its glaciers would lead to only 0.4 inches (1 centimeter) of global sea level rise, according to Helen Fricker, a member of NASA's sea level change science team.

However, the ice shelf's growing crack and potential collapse are indicators of the overall health of ice shelves across Antarctica.

"What we are seeing on Larsen C has implications for the big ice shelves farther south that hold considerable (sea level) potential," Eric Rignot, another member of the sea level change team, said in a statement. "The loss of these larger ice shelves and the resulting acceleration of glacial calving could amount to meters of sea level rise in the decades and centuries to come."