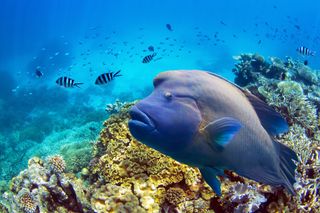 The report, published by the financial consultancy Deloitte Access Economics, also found that the enormous coral reef off of Queensland, Australia, supports 64,000 jobs in that country and contributed AU$6.4 billion ($4.9 billion) to Australia's economy in the 2015 to 2016 fiscal year. But the reef is under threat from climate change, with back-to-back bleaching episodes threatening the survival of vast swaths of coral.

The Great Barrier Reef Foundation commissioned the report, which drew from publicly available economic data as well as surveys of Australian residents. The analysis counted direct economic benefits, such as income made by tour-dive companies or commercial fishing supported by the reef. If also included indirect economic benefits, like the boon to restaurants and hotels near the Queensland coast and the economic value of the research being done on the Great Barrier Reef.

Ninety percent of the AU$6.4 billion the reef brought into Australia between 2015 and 2016 came from direct tourism activities. [Images: Colorful Corals of the Deep Barrier Reef]

Beyond the direct and indirect benefits to Australia's economy, the reef also provides what Deloitte Access economists called "indirect" or "non-use" value. This is the value the Great Barrier Reef has by simply existing: its social value, its importance for biodiversity and its importance as a point of Australian identity and pride.

The AU$56 billion ($42.5 billion) valuation comes from extrapolating the direct and indirect economic benefits of the reef over the next 33 years, until 2050. Over that time period, the direct-use benefit from tourism is AU$29 billion ($22 billion). Other contributors to that number include ecosystem services, like the ecological functions the reef conducts to cycle nutrients and protect the coastline, and the "brand value" of the reef in raising Australia's reputation as an international destination.

The reef also has value that can't be estimated in dollars, the economists concluded. It's an important place for indigenous Australian cultural and religious heritage, and archaeological sites along the reef have revealed artifacts, such as stone tools and rock art, that hint at the earliest occupants of Australia.