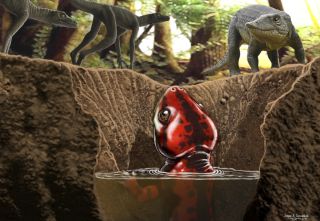 This bizarre amphibian, Chinlestegophis jenkinsi, was a small subterranean carnivore that lived during the Triassic period.
(Image: © Jorge Gonzalez)

A new fossil discovery links a bizarre modern amphibian to bizarre ancient amphibians with toilet-seat heads — and rescues a group of weird Triassic animals from their previous status as an evolutionary dead end.

The fossil represents a new species of caecilian, which are subterranean amphibians that look like nightmarishly giant worms. Members of this group lack limbs and have either no eyes or tiny, primitive eyes, since their ground-dwelling lifestyle affords little opportunity to see anyway. They do, however, have tiny needle-like teeth that allow them to attack prey like insects and worms. [See Images of Living Baby Caecilians]

The largest caecilian today, Caecilia thompsoni, is found only in Colombia and can grow to 5 feet (1.5 meters) in length. Most species aren't so gargantuan, though, which makes them hard to discover in the fossil record, Adam Huttenlocker, an assistant professor in anatomical science at the University of Southern California's Keck School of Medicine, said in a statement.

In the 1990s, though, a paleontologist named Bryan Small discovered two caecilian skulls, one each in the Colorado counties of Eagle and Garfield, in the Rocky Mountains. A new examination of these fossils reveals they are the oldest caecilians ever found by at least 15 million years.

The new analysis also revealed these fossils represent a new species, dubbed Chinlestegophis jenkinsi, that lived in the Triassic period more than 200 million years ago. Before this discovery, the oldest known caecilians came from the early Jurassic, which lasted from 199.6 million to 145.5 million years ago. The find closes the gap between the caecilians and a weird amphibian group called the sterospondyls, which also lived during the Triassic; these now-extinct amphibians are best known for their odd toilet-seat-shaped heads.

The anatomy of the C. jenkinsi specimens suggests that early caecilians shared features with stereospondyls, and that the wormy amphibians and the toilet-seat heads diverged from a common ancestor about 315 million years ago, the researchers reported Monday (June 19) in the journal Proceedings of the National Academy of Sciences.

The fossilized skulls were just under 1 inch (2.5 centimeters) long, and the fossilized burrows that became the wormy amphibians' final resting place were only about 2 inches (5 cm) wide, Huttenlocker said. At most, C. jenkinsi probably grew to about a foot (30 cm) in length, study author Jason Pardo, a doctoral candidate at the University of Calgary in Canada, said in the statement. Like its modern relatives, the ancient caecilians probably subsisted on insects.

Triassic Colorado was a scorching desert during the summer, the researchers said, so C. jenkinsi probably benefited from its underground lifestyle.

"The ancient caecilians lived in these burrows deep in the soil down to about the level of the water table so that they could keep wet and avoid the extreme aridity from the dry season," Huttenlocker said. He plans to return to Colorado this year to look for complete caecilian fossils.

"We'll find one," he said. "This is just the initial report."