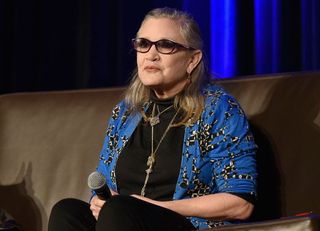 Actress Carrie Fisher had a number of drugs in her system, including cocaine and MDMA, when she went into cardiac arrest before her death in December. But how do these drugs affect the heart?

Fisher experienced what appeared to be a cardiac arrest at the end of a long flight on Dec. 23. Toward the end of the flight, she vomited and then became unresponsive, according to a toxicology report released Monday (June 19). She was rushed to the Ronald Reagan UCLA Medical Center, but suffered another cardiac arrest, which is when the heart suddenly stops beating. Fisher died on Dec. 27 at age 60.

According to the new report, Fisher tested positive for cocaine, methadone, alcohol and opiates when she arrived at the hospital. Further tests after her death revealed that she had likely consumed cocaine no earlier than 72 hours before her arrival at the hospital, according to the report from the Los Angeles County Medical Examiner. These postmortem tests also suggested she had taken heroin and MDMA (also known as ecstasy), but doctors could not determine the dose or timing of the use of these drugs. [9 Weird Ways You Can Test Positive for Drugs]

Ultimately, the medical examiner said it was difficult to determine the role drugs played in Fisher's death. The cause of her death was listed as "sleep apnea and other underdetermined factors," and the report also noted other that she had other health conditions, including heart disease. The manner of death was undetermined, the report said.

Many drugs can have harmful effects on the heart, which could lead to problems such as an abnormal heart rate and even a heart attack, according to the American Heart Association (AHA).

For example, cocaine, amphetamine and MDMA are stimulant drugs that affect the central nervous system and can lead to increased blood pressure, rapid heart rate and changes in body temperature, the AHA says.

In particular, cocaine use has been linked with a number of harmful cardiovascular effects. A 2012 study found that people who reported using cocaine at least once a month had higher blood pressure, stiffer arteries and thicker heart-muscle walls than people who didn't use the drug. All of these factors can lead to an increased risk of a heart attack, the researchers in that study said. In fact, the researchers called the addictive substance the "perfect heart attack drug." Cocaine can also increase the risk of heart rhythm problems and sudden cardiac arrest, according to the U.S. Drug Enforcement Administration.

Combining cocaine with alcohol can be particularly dangerous, because the two substances react to form the chemical cocaethylene, which is particularly toxic to the heart, according to the National Institute on Drug Abuse (NIDA).

Similar to cocaine, MDMA has been linked with heart attacks in some people. For example, in 2003, the American College of Emergency Physicians published a report describing the case of a 27-year-old man who had a heart attack after taking MDMA. Use of this drug of may also reduce the efficiency of the heart's pumping, according to NIDA.

In contrast to stimulant drugs, which increase heart rate, heroin can slow a person's breathing and heart rate, sometimes to dangerously low levels, according to NIDA. The risk of this happening is higher when a person takes too much of the drug (overdose) or when heroin is combined with other drugs, like alcohol, NIDA said.

People who inject heroin may also develop bacterial infections in the tissue lining the heart, as well as the heart values. These types of infections can be life-threatening, leading to heart failure, in which the heart is not able to pump enough blood for the body, according to the Mayo Clinic.

Fisher's daughter, Billie Lourd, released a statement to People magazine connecting her mother's death to drug use. "My mom battled drug addiction and mental illness her entire life. She ultimately died of it," Lourd was quoted as saying. "She was purposefully open in all of her work about the social stigmas surrounding these diseases," Lourd said.

Fisher's brother, Todd Fisher, said that his sister's drug addiction and bipolar disorder "slowly but surely put her health in jeopardy over many, many years," according to the Los Angeles Times.