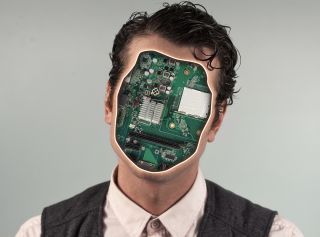 With technology offering a growing list of opportunities for sophisticated enhancement of our bodies, could we become less than human?
(Image: © Ezume Images/Shutterstock)

WASHINGTON — In science fiction, there's no shortage of characters who are enhanced with some form of machinery. Tony Stark, aka Iron Man, wears an electromagnetic device inside his chest that keeps him alive and powers his metal suits. When Star Wars' Luke Skywalker lost his hand in a lightsaber battle, he quickly replaced it with a mechanical hand that worked just like the original — and looked just like it, too. And in the 2015 film "Mad Max: Fury Road," Imperator Furiosa sports a dangerous-looking metal prosthetic arm that appears to have been assembled from bits of power tools, and which she uses to cement her reputation as a ruthless fighter.

Even in the real world, technology enables mechanical reconstruction and modification of the human body, from prosthetic limbs and pacemakers to brain-computer interfaces and contraceptive implants.

But are there limits to technological "upgrades" to our bodies, and at what point do we simply stop being human, and become…something else? [Bionic Humans: Top 10 Technologies]

Using technology to improve what the body can do dates back to when humans' distant ancestors crafted the first tools out of rocks, Suveen Mathaudhu, an assistant professor with the Department of Mechanical Engineering at the University of California in Riverside, said here during a panel on June 16 at the Future Con festival, where science and technology intersect with science fiction.

Ever since early humans crafted those stone tools, using technology to enhance our natural abilities has frequently made our lives better — and has also raised ethical concerns along the way about how people might be negatively affected by relying too much on mechanical enhancements, Mathaudhu said.

Science-fiction interfaces between humans and machines take many forms — there are interactions that archive and replay experiences in a way that connects directly with the brain to access emotions and the senses, and transport users to an alternate reality. Some enhancements help users regain a lost function, such as a missing or damaged limb or sensory experience. Then there are the modifications that amplify abilities, which are more technologically feasible than one might expect, panel member Dan Cosley, a program director for Computer and Information Science and Engineering (CISE) at the National Science Foundation (NSF), told the audience.

In some instances, technology already in use can do incredible things, but researchers are still investigating — and defining — its abilities and limitations, panelist Katherine Pratt, a University of Washington doctoral candidate with the Center for Sensorimotor Neural Engineering, an engineering research center funded by the NSF, said at Future Con.

And then there's the question of who will own and control the data collected — and broadcast — by biologically integrated mechanisms such as pacemakers or defibrillators, which raises concerns about personal privacy, she added.

As technology moves forward, engineers and researchers should not lose sight of what people actually need and want from their enhancements, panel member and neuroethicist Tim Brown, a University of Washington doctoral candidate at CSNE's Neuroethics Thrust, told the Future Con audience.

For example, in a recent focus group of people with spinal cord injuries, participants said that when it came to technological enhancements, they wanted better wheelchairs — not exoskeletons, Brown said.

In fact, one of the focus group participants literally had skeletons in his closet — a defunct collection of exoskeletons that he'd tested and discarded, according to Brown, who studies the ethics of neural technology and engineering. While exoskeleton design may intrigue engineers, wheelchairs are often simply the more practical solution for everyday use, he added.

But perhaps the question that looms largest is this: At what point do artificial enhancements cease to merely improve human abilities and begin to outweigh our intrinsic humanity? Daleks, the villains of the BBC television show "Doctor Who," are little more than a blobby mass of flesh and a brain enclosed in an armored shell, Mathaudhu said at the panel. If humans were to reach that level of mechanical "enhancement," would we still be human?

To answer that, we may need to consider what it means to be human — and who gets to decide that, the panelists said.

Maybe "human" is simply too binary a term, and humanity should rather be defined along a spectrum, Cosley said. And from a sociological perspective, the connections, interactions and relationships forged between individuals also inform what we are as a species, the panelists added. In the long run, these less tangible factors may matter as much as, or more than, the basic biological structures and functions that can be enhanced or replaced entirely by machines, the panelists said.