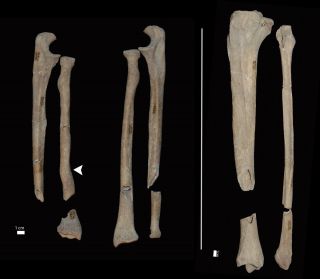 Cut marks on the bones of the skeletons found in a medieval grave suggest a barbaric amputation was carried out.
(Image: © Teresa Fernandes, Eugénia Cunha, et al, International Journal of Paleopathology)

Archaeologists who were digging in a medieval Portuguese necropolis unearthed three skeletons of young men who had their hands and feet cut off just before they died.

Most likely the consequence of judicial punishment, the gruesome amputation was inflicted on the men between the 13th and 15th centuries in the town of Estremoz, a city in southern Portugal, close to the Spanish border.

The remains, along with 94 other skeletons, were excavated in 2001 from a necropolis known as Rossio do Marquês de Pombal.

"The three bodies were buried in graves located side by side and relegated to the south[ern] limits of the cemetery," Eugénia Cunha, an anthropologist at the University of Coimbra, told Live Science. [25 Grisly Archaeological Discoveries]

The researchers were astonished to see that the skeletons were handless and footless. "Their hands and feet with stumps were placed under or near the bodies," Cunha said.

This is the first time that three individuals have been found buried in the same medieval necropolis with both their arms and lower legs severed just before death.

One individual was between ages 18 and 20, and another was between 25 and 35, the researchers found using carbon dating. It wasn't possible to determine the age of the third skeleton because it was incomplete.

The researchers, who published their findings online June 9 in the International Journal of Paleopathology, noted that the hands and feet were complete, with all of the bones attached as they were in life. This suggests that the amputation was intentional and occurred around the time of death, while the joints' soft tissues were still intact. In addition, if they had been postmortem amputations, the skeletons would have had multiple lesions, characteristic of the corpose being cut up or quartered after death as a form of public shaming, the researchers said.

The types of cuts and their features suggest the limbs were cut as a form of punishment, the researchers said. In addition, the cuts are similar to those seen in England that involved male individuals who had either their feet, hands or legs amputated before death. [Medieval Torture's 10 Biggest Myths]

In the 14th and 15th centuries, thieves and counterfeiters were sentenced to have their hands cut off, the researchers noted.

"Yet severe body mutilations were relatively rare and only applied to individuals considered very dangerous," said Teresa Fernandes, a researcher in the Department of Biology at the University of Évora in Portugal.

"It is possible that the cutting of all limbs would represent a punishment only applied to very serious crimes," she added.

The three men may have been punished for political reasons.

"These skeletons may represent the testimony of vigorous application of justice as an act of royal sovereignty in a peripheral but militarily strategic region," the researchers said.

The fractures on the shinbone indicate the legs were cut with a strong blow, while the symmetry of the cut marks on the legs also suggests they were straight and parallel to each other when they were severed. Those marks and others led the researchers to conclude that the barbaric procedure was carried out with a sharp instrument, such as a sword or an ax. But in one case, it wasn't a single blow: Cuts on the incomplete skeleton revealed that the man suffered at least one failed attempt to cut off his legs.

Other than the lesions in the forearms and leg bones, the researchers did not find any evidence of trauma or injuries near the vital organs. Therefore, they could not confirm that the men were executed after the amputation.

Rather, the individuals probably bled to death. "It is quite likely that the amputation, without any kind of assistance, caused severe hemorrhagia that led to death," Cunha said.

She noted that the individuals did not survive long, as their bones showed no signs of healing.