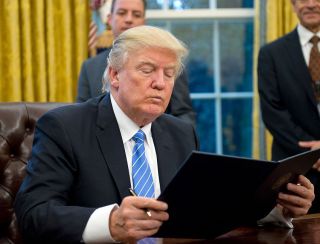 President Donald Trump is 70 years old, an age at which many people need reading glasses or other devices to aid their vision. So where are Trump's glasses?

Although Trump doesn't seem to wear them often, he has been seen donning spectacles on some occasions. For example, during the presidential campaign, Trump wore a pair of reading glasses to peruse The New York Times. On another occasion, he put on reading glasses during a stump speech to recite the lyrics of a song called "The Snake," according to Business Insider.

However, Trump's apparent lack of reading glasses has also seemed to cause problems at times. During a legal deposition last year, Trump said he could not read from a document because he did not have his glasses, adding "this is such small writing," according to CBS News. Some photos also show Trump reading without glasses using notes typed in a large font and in all caps.

Although the details of Trump's case aren't known, almost everyone experiences changes in vision as they get older.

These changes are due to a condition that comes with aging called presbyopia. People with presbyopia have trouble focusing on nearby objects, like book pages. Normally, when people look at something close up, the lenses in their eyes change shape with the help of an eye muscle, according to the Mayo Clinic. But as people age, the eyes' lenses become more rigid and less able to change shape, making it harder to focus on things that are nearby. [8 Tips for Healthy Aging]

In general, for people who can see well at far distances, the ability to read and see things close up starts to decrease around age 40, and continues to decline incrementally over the following 20 years, said Dr. Ira Udell, chairman of ophthalmology at Hofstra Northwell School of Medicine in Hempstead New York Health in New Hyde Park, New York, who has not treated Trump. When this happens, in many cases, people can simply go to the drugstore and find a pair of reading glasses that works for them, Udell said. But people who have trouble seeing at far distances may need prescriptions for distance and reading glasses, he said.

If a person needs treatment for presbyopia, glasses are not the only option. Another possibility is using "monovision" contact lenses, in which one contact lens is used for near vision and another is used for distance vision, Udell said. There are also bifocal contact lenses, similar to bifocal glasses, which can be used for both reading and seeing at far distances.

Older adults can also consider surgical options for treating presbyopia. By age 70, many people develop cataracts, which cause the eye's lens to become cloudy, affecting vision. Cataracts can be treated with surgery to remove the eye's lens and replace it with an artificial one, and doctors can also fix presbyopia while doing the cataract surgery. They can do so by implanting one new lens for seeing at distance and one for reading, Udell said. Or they can use "multifocal implants," which are artificial lens implants that are similar to bifocal glasses or contact lenses.

If a patient has presbyopia but doesn't yet need cataract surgery, there is a new surgical option known as corneal inlay implants. These ring-shaped devices improve near vision but do not affect distance vision, according to the Food and Drug Administration (FDA). In 2015, the FDA approved a corneal inlay known as Kamra, which is inserted into a pocket created in the cornea during eye surgery. However, because of the newness of the device, many doctors are waiting for more long-term data before using these implants in their patients, Udell said.

Udell stressed that there is no one-size-fits-all approach for treating presbyopia. The given treatment depends on what patients are looking for and what they want in order to best function in their everyday lives, he said. Ophthalmologists can inform patients of their options and "let them decide on what fits their needs," Udell said.