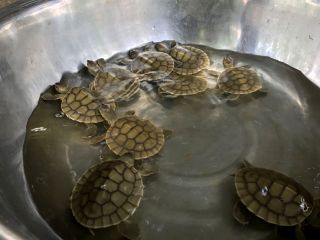 Cambodia's national reptile is on the brink of extinction, but there may be new hope for the reptiles after nine Cambodian Royal Turtle babies were successfully hatched, conservationists recently announced.

The Royal Turtle, also known as the southern river terrapin (Batagur affinis), is one of the world's most endangered freshwater turtles, conservationists said. The turtle is listed as critically endangered by theInternational Union for Conservation of Nature (IUCN) and was thought to be extinct in Cambodia. After a small population was discovered in the Sre Ambel River in 2000, a protection program was launched and community members were encouraged to find and protect turtle nests.

A villager found a nest containing 14 eggs in February, and with assistance from the Royal Turtle Conservation Team from the Fisheries Administration (FiA) and the Wildlife Conservation Society (WCS), the nest was fenced in and protected for three months until the turtles hatched. [Photos: Thousands of Baby Turtles Hatch in Brazil]

"I am delighted to see those eggs have successfully hatched, and that the hatchlings have been taken to the conservation center in Koh Kong Province," Long Sman, who guarded the Royal Turtle nest for three months, said in a statement. "I am proud of the result, and especially to be part of conserving Cambodia's Royal Turtles from extinction."

The nine turtles that successfully hatched were relocated to the Koh Kong Reptile Conservation Center. The hatchlings will be raised at the center and may be part of a breeding program in the future, according to the WCS.

"This is a big concern for Royal Turtle conservation," Sitha added. "If sand dredging, illegal clearance of flooded forests and illegal fishing continues, then our national reptile species faces a high risk of extinction."