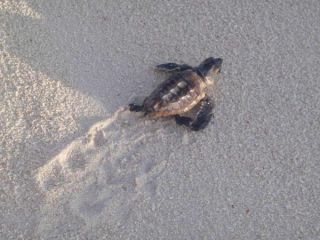 An army of tiny baby turtles recently made a determined crawl to the Amazon River, after their release by a conservation group.

The adorable creatures, called Arrau River turtles, had been nursed through the most dangerous part of their lives the time just after they hatched before being released into the wild. As conservationists watched, 180,000 baby turtles made their way slowly to the river for the first time, according to TreeHugger, a conservation news website.

The endangered reptiles had managed to get through the first, vulnerable weeks of their lives with the help of Brazil's Turtles of the Amazon Project, along with Brazil's Foreign Ministry and some helpful locals. [In Pictures: Tagging and Tracking Sea Turtles ]

The turtles were released a few hundred miles from the city of Manaus. Each was about 2 inches (5 centimeters) long; an adult can grow up to 30 inches (76 cm) long and weigh 100 pounds (45 kilograms).

Arrau River turtles produce up to 100 offspring per season, but only about 5 percent of them normally survive the activities of predators. The Brazilian government-sponsored project (O Projeto Quelônios da Amazônia, in Portuguese) was established in 1979 to better their chances.

Arrau River turtles, much like sea turtles, bury their eggs in holes on the sandy shore and leave the hatchlings to fend for themselves. According to TreeHugger, when European colonizers arrived in the region and discovered the turtle eggs, the eggs quickly became a culinary favorite among high society. They were also used to make oil for lighting lamps before the advent of kerosene.

In the 1930s, conservationists began to underscore the importance of preserving the species by protecting their hatching grounds. Eventually the government became involved. The Turtles of the Amazon Project says it has successfully released around 40 million juvenile turtles of 70 different species.

The project enlists the help of local residents who gather the eggs and place them in a turtle nursery of sorts. When they hatch, they are cared for, for about 30 days, until they are stronger and less attractive to predators.