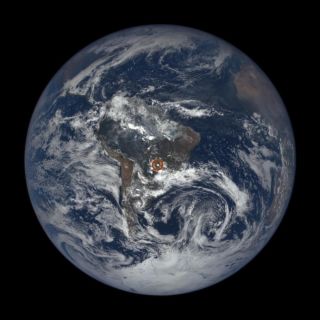 Sun glints off of ice crystals high in the Earth's atmosphere in images taken from the satellite DSCOVR. The orange circle shows one of the sun glints.
(Image: © NASA's Goddard Space Flight Center)

The "pale blue dot" has been twinkling like a brilliant diamond in satellite images, and scientists may have finally solved the mystery of why.

Mysterious flashes of light from Earth were captured by the National Oceanic and Atmospheric Administration's Deep Space Climate Observatory, or DSCOVR, an Earth and space weather satellite launched in 2015. Eagle-eyed amateur observers noticed the flashes of light, which occurred hundreds of times over the span of a year.

Now, NASA scientists think they may have uncovered the cause: Flecks of high-flying ice crystals in the atmosphere glinting in the sun. [Earth from Above: 101 Stunning Images from Orbit]

A powerful camera aboard the DSCOVR satellite has been taking pictures every hour since 2015 from its spot between the sun and the Earth. While skimming through these hourly images, Alexander Marshak, DSCOVR deputy project scientist at NASA's Goddard Space Flight Center in Greenbelt, Maryland, first noticed these sparkling lights over the oceans.

It turned out that Marshak wasn't the first to observe these flashes. Astronomer Carl Sagan first spotted the reflections in 1993. At the time, the Galileo spacecraft was studying Jupiter, but briefly turned its lens toward the home planet. While reviewing these Earth images, Sagan and his colleagues noticed the anomaly.

"Large expanses of blue ocean and apparent coastlines are present, and close examination of the images shows a region of [mirror-like] reflection in ocean but not on land," Sagan and his colleagues wrote in their study, which was published in Nature in 1993.

These flickering lights occur when sunlight hits smooth patches in the ocean, and the light then reflects directly back into space and hits the camera head-on, Marshak said in a statement. In this scenario, the ocean acts like a flashbulb in front of the camera.

But in Galileo's images, many of the flashes seemed to occur over land, Marshak and his colleagues noticed. Enthusiasts who were looking at the database of images from DISCOVR began pointing out the flashes, too.

"We found quite a few very bright flashes over land as well," Marshak said in the statement. "When I first saw it, I thought maybe there was some water there, or a lake the sun reflects off of. But the glint is pretty big, so it wasn't that."

To explain the phenomenon, the team looked for hidden sources of water to explain the sun glint. One possibility: ice crystals floating high in the atmosphere. To test this idea, the team first took an inventory of all the sun glints occurring over land in the modern satellite images. Overall, the bursts occurred 866 times.

Based on the physics of light reflection, only certain spots on Earth should produce these twinkling reflections, they reasoned. Only when the angle between Earth and the sun equals the angle between the Earth and the satellite camera would light from these ice crystals bounce directly onto the camera and produce bright glints. Sure enough, the flashes occurred only at times and locations on Earth where these angles matched, the researchers reported today (May 15) in the journal Geophysical Research Letters.

Next, they looked at the angle of light to show that these glints occurred when light reflected off  horizontally aligned ice crystals.

Finally, the researchers showed that the light probably wasn't coming from Earth. Whenever these glints occurred, they found thin, wispy clouds, known as cirrus clouds, hovering high in the atmosphere. Cirrus clouds are composed of supercooled ice crystals.

"The source of the flashes is definitely not on the ground. It's definitely ice, and most likely solar reflection off of horizontally oriented particles," Marshak said.