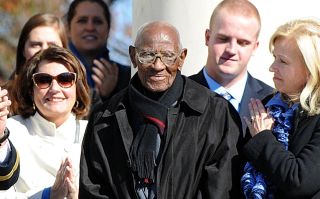 Richard Overton, who is considered America's oldest living veteran, is honored by President Barack Obama during a ceremony for veterans at the Tomb of the Unknowns on Veterans Day at Arlington National Cemetery on Nov. 11, 2013. He was 107 years old at the time.
(Image: © Olivier Douliery-Pool/Getty)

His secret? "Cigars and God," according to the description on his GoFundMe page.

"I've been smoking cigars from when I was 18 years old. I'm still smoking them. Twelve a day! Doctors say, 'Don't smoke those cigars, don't eat no salt.' He took me off of salt 40 years ago. And I eat salt whenever I get ready," Overton said in 2014, according to the local Austin Fox News station.

The oldest person to ever live (who's age was verified), was Jeanne Louise Calment of France, who was 122 years and 164 days when she died on Aug. 4, 1997, according to Guinness World Records. The current record holder for the title of oldest living man is 113-year-old Holocaust survivor Israel Kristal of Israel, who was born on Sept. 15, 1903, according to Guinness.

"Guinness World Records is consulting with our expert gerontologists and will verify the new title holder, subject to evidence review, in due course," said a Guinness spokesperson in a statement in April.

These record holders have given various reasons for their longevity. In 2015, the world's oldest person at the time, 116-year-old Gertrude Weaver, said the keys were exercise and kindness. Misao Okawa, who had been crowned the world's oldest person in 2013, when she was 114 years old, attributed her long life to "eating delicious things," such as ramen noodles, beef stew, hashed beef and rice, Live Science previously reported.

Though scientists haven't found any fountain of youth, plenty of research has investigated the keys to longevity and common elements of centenarians.

Researchers who followed 477 Ashkenazi Jews between the ages of 95 and 112 found that these very old individuals did not have superhealthy lifestyles, with their profiles nearly matching those of the general public in terms of the number who were overweight, didn't exercise or smoked, the scientists said. The researchers' conclusion? Genes play an important role in whether a person lives to see 100, the scientists reported in 2011 in the Journal of the American Geriatrics Society.

Of course, genes do not act alone, and a healthy lifestyle can also contribute to a long life. For instance, researchers found that centenarians living in Sicily's mountain villages ate a Mediterranean diet that was rich in fruits, vegetables and whole grains, and low in red meat and sweets, Live Science previously reported.