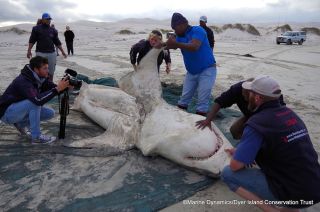 A female great white shark that was missing its liver.
(Image: © Marine Dynamics)

Orca whales have claimed the life of another great white shark by eating its liver and leaving it for dead, making it the fourth such gristly death in less than two months.

During a four-day period in early May, researchers reported finding the bodies of three great white sharks (Carcharodon carcharias) that had washed ashore along South Africa's Western Cape province. All of these sharks were mysteriously missing their livers, necropsies (animal autopsies) showed.

Now, a fourth dead, liverless shark has washed ashore, according to a post today (June 26) on the Marine Dynamics blog, a site hosted by a shark cage diving company. The newly discovered 13-foot-long (4 meters) male shark was missing its liver, testes and stomach, according to the blog post. [See Photos of the Shark Necropsies]

No one saw the sharks' last moments, but their injuries indicate that orcas, also known as killer whales (Orcinus orca), were the culprits, the researchers said.

"This is the fourth documented deceased white shark since May that we can connect to Orca predation" Alison Towner, a white-shark biologist for the Dyer Island Conservation Trust in South Africa, wrote on the Marine Dynamics blog. "We don't really know how long the sharks will stay away from the area as a result of predation pressure."

Although orcas aren't known to regularly hunt great white sharks, "it's not unprecedented," said Andrew Nosal, an assistant professor of biological sciences at Saint Katherine College in San Marcos, California, and a visiting assistant researcher at Scripps Institution of Oceanography in San Diego. (Nosal was not involved in the recent shark analyses.)

Scientists know that both orcas and great whites live off the western coast of South Africa, where the Atlantic and Indian oceans meet. Although Nosal wasn't aware of orca-on-shark attacks in that area, he had heard of instances in which orcas have hunted the sharks in other locations, such as off the coast of southern Australia and near the Farallon Islands, a wildlife refuge off the coast of San Francisco, he said.

In addition, orcas are known to hunt and eat the livers of the broadnose sevengill shark (Notorynchus cepedianus) off the coast of California, said Chris Lowe, director of The Shark Lab at California State University, Long Beach, who wasn't involved with the South African analyses.

Not much is known about orca predation on great white sharks, Nosal said. But any marine biologist can tell you that other marine mammals prey on the livers and internal organs of smaller sharks, he said.

For instance, sea lions routinely hunt leopard sharks off the coast of California. In grisly detail, Nosal described how sea lions grab onto leopard sharks (Triakis semifasciata), and then twist and turn the shark until they can bite just under its gills.

"It's almost like a sweet spot," Nosal told Live Science. "Once they have a good grip just under the gills, they thrash the shark above the water with such force that the shark is actually eviscerated. All of the internal organs come out of that one opening that the sea lion made."

Then, the sea lion gobbles up the internal organs and leaves the rest of the carcass, which will either sink to the seafloor or wash ashore, Nosal said.

Sharks have enormous livers, he noted. Livers are filled with fats that give the shark buoyancy. "Bony fishes have a swim bladder that they can fill with gases, and those gases provide buoyancy for the fish," Nosal said. "Sharks do not have a swim bladder. Instead, they have a very large liver." [Aahhhhh! 5 Scary Shark Myths Busted]

In addition to being filled with fat, shark livers are "very energy- and nutrient-rich," Nosal said. It's unclear why orcas would go after the sharks' livers, but Nosal said he imagines "they have a high metabolism, and they have a lot of nutrient needs, and so those fats might really help them out."

Still, it's impossible to pin the sharks' deaths squarely on the orcas without more evidence, such as video footage or a first-person account, he said.

One commenter on the Marine Dynamics blog wondered whether the sharks could have died from boat strikes, but Nosal dismissed that idea.

"These sharks are certainly common at the surface, and so a boat strike is possible," Nosal said. "However, because three sharks washed up around the same time, three boat strikes are unlikely."

Moreover, when sea lions attack leopard sharks, "we often see these sorts of 'cluster predations,' where the sea lion will eviscerate several sharks around the same time," he said. "So again, all the evidence is consistent with orca predation."

Editor's note: This story was originally published on May 11, 2017, and updated to include information about the fourth dead shark.