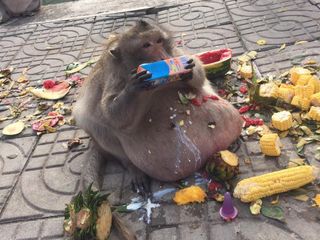 Tourists at a food market in Thailand make a habit of feeding this now-obese macaque loads of sugary and fatty foods.
(Image: © Viral Press)

A morbidly obese macaque who lives near a floating market in Thailand is raising eyebrows for his sheer size.

At about 33 lbs. (15 kilograms), the chubby monkey, dubbed "Uncle Fatty" by tourists in the park, dwarfs his average-size comrades, who typically weigh about between 13.2 and 15.4 lbs. (6 and 7 kg), said Patricia Turner, a pathobiologist at the University of Guelph in Canada, who has studied obesity in macaques. The portly primate is now entering a special wildlife rescue center to get to a healthier state.

But how exactly did Uncle Fatty get so rotund, and are the causes and consequences of obesity in animals similar to those found in humans?

"Like humans, macaques become obese from consuming excess calories — regardless of the type of food," Turner told Live Science in an email.

And it turns out that Uncle Fatty isn't alone: As animals that live in association with humans take up the habits of people, the animals too are facing increased rates of obesity and metabolic disease, such as type 2 diabetes, Turner said. [See Images of Uncle Fatty, the Obese Macaque in Thailand]

In Uncle Fatty's case, the problem is clear: too much food. He lives near a popular floating food market (where goods are sold from boats) frequented by tourists who love to see the portly monkey chow down. Among his favorite treats are noodles, sweet corn on the cob, milkshakes and sweet melons. Macaques and humans are physiologically very similar, and for both, too many calories lead to excess weight gain, Turner said.

"Uncle [Fatty] has got[ten] fat because he has just been eating everything that people give to him," Kawinoat MongKholtechaphat, an organizer with the primate conservation group Monkey Lovers, which is helping Uncle Fatty get to a healthier weight, told The Mirror. "He's not sick. He just needs help. He likes eating, and there are lots of visitors and tourists who give him food all day."

However, it's easier to gain weight on certain foods than others, Turner said. Sugary food is one of the key problems. "Excessive amounts combined with lack of exercise and obesity can trigger metabolic disease, including diabetes," Turner said. Fatty foods, which pack more calories per gram than other types of macronutrients, can also contribute to weight gain, she added.

To combat his weight gain, Uncle Fatty has been moved 100 miles (161 kilometers) away from his home near the floating market to a wildlife center, the Mirror reported. There, he will be given a healthier diet and an exercise regimen, including a regular routine of running and swinging with other animals to slim down, the Mirror said.

In the past, obesity was rare in wild animals. But as humans have packed on pounds, the animals that live alongside them have gained weight as well. For instance, a 2014 study conducted by the University of Alabama found that 40 percent of zoo African elephants were overweight. Primates aren't immune to the problem either, Turner said.

"There is increased recognition of obesity as a problem for captive macaques," Turner said. "We have had the unfortunate experience of seeing very obese macaques kept as 'companions' in private homes."

One memorable individual Turner has encountered weighed almost 88 lbs. (45 kg), though the animal came from a different macaque species — one that weighs slightly more than Uncle Fatty's species when fully grown, she added.

In a 2011 study in the journal Comparative Medicine, Turner and her colleagues found that it wasn't just captive animals at risk. In midlife, macaques who live in the wild, but live close enough to humans to have ample food sources, also tend to pack on excess weight around their midsections, just like humans do.

To combat this trend toward obesity, people who work with the animals have gotten creative, Turner said.

"Animal caregivers try to make tasty treats for macaques using low-fat and low-sugar ingredients, and they try to think of creative ways to slow the eating process down and encourage problem-solving, for example, by hiding the food in novel places, freezing the substances in containers or creating puzzles that the animals must solve to access the treat," Turner said.

Animals at increased risk of diabetes, which raises blood sugar levels, are also being trained to comply with blood sugar checks, she said.

"Body weights are generally tracked on a monthly basis, and animals that may be at risk for having high fasting blood sugar levels can be trained to cooperate and present a finger for pricking for blood sugar level monitoring via a glucometer," Turner said.