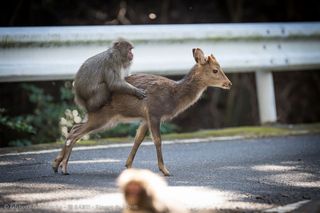 Too much monkey business? A young male Japanese macaque — a tailless monkey with distinctive cheek pouches — was recently observed mounting and performing sexual actions on the backs of female sika deer on Japan's Yakushima island.

The monkey clambered onto the deer and thrust his pelvis repeatedly, in typical copulatory fashion, and chased away other monkeys that approached the deer, researchers described in a new study.

Although sexual monkeyshines between different species are relatively common in the animal kingdom, this behavior is most frequently seen between species that are closely related, or between distant species that are in captivity, according to the study authors. This male macaque was part of a group of males on the island that were of lower social standing, and his affinity for hoofed partners might stem from restricted access to available females, they said. [Animal Sex: 7 Tales of Naughty Acts in the Wild]

On the island, macaques, also known as snow monkeys, live side by side with sika deer. The deer feast on fruit that the monkeys drop from trees, while the monkeys groom the deer and are even known to ride them, much as people ride horses, scientists have found.

However, this is the first known instance of a monkey behaving sexually with a deer, and only the second case of sexual interaction between two species that aren't closely related — the first was in 2008, when researchers observed an Antarctic fur seal trying to have sex with king penguins.

Let's get it on

The unusual activity between the deer and the monkey was first spotted by study co-author and photographer Alexandre Bonnefoy, who was observing a group of macaques on Yakushima. On Nov. 6, 2015, Bonnefoy noticed that an adult male macaque was trying to copulate with two different female deer, guarding them against advances from other males and charging aggressively at curious macaques to drive them away.

Bonnefoy's photographs and video showed the monkey climbing atop a female deer, initiating copulatory movements and hopping off after about 10 seconds. Penetration did not appear to occur, but the deer licked herself clean after the monkey dismounted, suggesting that he had ejaculated on her back, the study authors wrote.

A second encounter was less successful for the amorous primate. This time, the female deer he chose was a less willing partner, bucking and dodging to shake the monkey off.

All in the family — or not

There are several possible explanations for why a macaque would approach a deer with sexual intent, according to study co-author Cédric Sueur, an associate professor in the Department of Ecology, Physiology and Ethology at the University of Strasbourg in France.

Sometimes, interspecies sex happens because animals simply don't recognize their partner as belonging to another species — but that generally applies to closely related species, and is a highly improbable scenario for a pairing of animals as physically different as a monkey and a deer, Sueur told Live Science in an email.

"The most realistic hypothesis would be the 'mate deprivation hypothesis,'" Sueur said, "which states that males with limited access to females are more likely to display this behavior."

As young male macaques reach puberty, they are frequently excluded from social groups by the dominant male and may have limited contact with females until they find a new group to join. This can take time, making them more likely to exhibit sexual behavior toward females outside their species, Sueur said.

"As a consequence to not have access to females, these peripheral males could socially learn to have sexual interaction with sika deer in order to decrease their sexual frustration," Sueur told Live Science.

However, further observations would be required for scientists to determine how interspecies sexual activity could affect the breeding fitness of macaque males in the long term, and for researchers to better understand how the behavior emerged in the first place, he added.

The findings were published online Jan. 10 in the journal Primates.