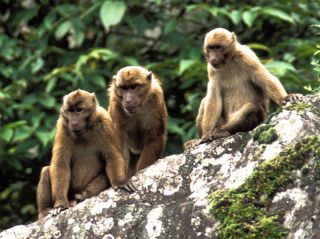 Monkey brains grow bigger with every cagemate they acquire, according to a new study showing that certain parts of the brain associated with processing social information expand in response to more complex social information.

"Interestingly, there are a couple of studies in humans by different research groups that show some correlation between brain size and the size of the social network, and we found some similarities in our studies," study researcher Jerome Sallet, of Oxford University in the U.K., told LiveScience.

"[Our study] reinforces the idea that the human social network was built on something that was already there in the rhesus macaques."

The researchers studied 23 rhesus macaques living in different size groups in a research facility; they had been in these groups for at least two months (the average length of time spent in their present group was more than one year).

These different groups each had a dominance-based hierarchy (except the one monkey that was caged alone). One's rank among male cagemates is dependent upon social interactions, including the ability to make friends and form coalitions, which grants the monkey access to valued resources.

The researchers scanned the brains of the monkeys using magnetic resonance imaging to gauge the sizes of different brain regions. They saw enlargements in gray matter in several areas of the brain associated with social interactions. On average, they saw more than a 5 percent increase in gray matter mass per extra cagemate.

The boosted brain areas included the temporal cortex, inferior temporal gyrus, the rostral superior temporal gyrus and the temporal pole. Based on what scientists know about these areas, increases in gray matter there could "reflect an increasing need to decode the significance of the facial expressions, gestures and vocalizations of a greater number of individuals and combinations of individuals as network size increased," the researchers write in the Nov. 4 issue of the journal Science.

The researchers then compared these brain scans with each male monkey's position within their dominance hierarchy. They saw several brain areas correlated to higher levels of dominance as well. Specifically, the inferior temporal sulcus and the prefrontal cortex showed size increases with higher dominance rating. These analyses accounted for social network size.

These changes in brain size are an example of the brain's plasticity, or its ability to change over time. Previous research has indicated that learning physical skills might be able to enlarge motor areas in the brain, but this hasn't been shown for social interactions. Especially for the correlation to social standing, these brain areas were probably expanding to deal with storing extra information about greater numbers of dominant and submissive cagemates.

Unlike studies in humans, this study looking at macaques manipulated the "friend number" for months, and as such, could determine the direction of the correlation; it suggests social network size actually causes the changes in brain size. Previous human study data could be interpreted in two ways: either larger brain areas lead to larger social networks, or larger social networks change the size of brain areas.

But there are limitations to the new study findings. The monkeys' assignment to different groups was not completely random (though the reasons for the assignments were unrelated to the study), suggesting some other factor may play a role in the link. Making the study truly random would be a monumentally expensive experiment, "virtually impossible for numerous reasons," the researchers write.

For example more gregarious animals might have been more likely to be housed in larger groups, though Sallet said this wasn't the case. "The monkey's social network was organized by researchers and didn't depend on the monkey's sociability in the groups," Sallet told LiveScience.

The study appears tomorrow (Nov. 4) in the journal Science.