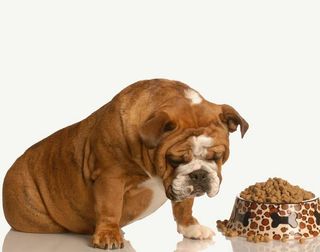 The problem of obesity isn't confined to just humans. A new study finds increased rates of obesity in mammals ranging from feral rats and mice to domestic pets and laboratory primates.

Americans have grown increasingly heavier, with the average body mass index (or BMI, a measure of height and weight that estimates fatness) increasing from about 25 in the early 1960s to around 28 in 2002, according to the Centers for Disease Control. The CDC considers adults with BMIs between 25 and 29.9 to be overweight.

However, Allison said, the new obese animal findings point to additional, yet-unidentified causes for the uptick in obesity.

"We can't explain the changes in [the animals'] body weight by the fact that they eat out at restaurants more often or the fact that they get less physical education in the schools," Allison told LiveScience. "There can be other factors beyond what we obviously reach for."

Allison first stumbled across evidence of overweight animals while looking at data on marmosets from the Wisconsin National Primate Research Center. The average weight of the monkeys had gone up over the decades, he noticed, and there seemed to be no plausible explanation. Allison queried primate center researcher Joseph Kemnitz as to what the cause might be: Were the marmosets from a different supplier? Had they been bred to be larger? The answers were "no" and "no."

But the monkeys' diets had been changed over the years, a switch that was well-documented by the lab. So Allison tried running the numbers again, this time controlling for the diet change.

"It only made the results stronger," he said. With the diet change, the animals should have lost weight, if anything.

Intrigued, Allison and his colleagues decided to investigate more thoroughly. They gathered data from over 20,000 individual animals living in 12 distinct populations. There were eight species in total: laboratory macaques, chimpanzees, vervet monkeys, marmosets and mice, as well as domestic dogs, domestic cats, and domestic and feral rats from both rural and urban areas. [Read: Is Fido Fat? Human Diet Tricks Could Help]

All of the populations had weight records stretching into the second half of the 20th century. Only control groups of lab animals were included to rule out any effects of treatments or experiments on obesity. Weights were measured at midlife and were available at several time points as late as 2006.

The researchers split the 12 populations into male and female sets for a total of 24 groups. They then analyzed each population to find out the percent change in body size over time.

"In 24 out of 24 cases, the slope of that percent body weight change was increasing," Allison said. "It strongly suggests that there is something going on."

In a second analysis, the researchers designated the heaviest 15 percent in the earliest weight data for each animal as "obese" (while human obesity starts at a BMI of 30, there is no universal definition of obesity for animals). They then used those weight points to see how many animals in each population fit into the obese category as time passed. This time, the percentage of obese animals increased in 23 out of 24 cases.

"It just highlights how little we understand about what's happening in terms of why we see this rise in body weight in our population," Jennifer Kuk, an obesity researcher at York University in Toronto who was not involved in the research, told LiveScience. "Perhaps this problem isn't as simple as just energy intake and energy expenditure, which has been the prevailing message over the last 10 years."

While it's not surprising that pets should be getting fatter along with their owners, or even that rats might be getting bigger by eating calorie-rich human garbage, Kuk said, the increase in body weight in controlled lab animals is unexpected.

There are several theories as to why animals and humans might be getting fatter even without the help of fast food and desk-jockey jobs, Allison said. Pathogens could be to blame: A virus called adenovirus 36 has been linked to obesity in both humans and animals. Hormone-disrupting compounds, or endocrine disruptors, have been shown to trigger obesity in mice exposed to the compounds in utero.

The change could be something as simple as our increasingly artificial environments, Allison said. Light pollution and sleep disruption have been linked to obesity. It's even possible that air conditioning and central heat are to blame.

"In the winter, you're not expending as much energy, because the room is kept warmer," Allison said. "In the summer, it doesn't get so hot, and we know that heat drives food intake down."

Allison emphasizes that these factors are only speculation at this point. Multiple researchers are investigating the factors, which may be the key to understanding the human obesity epidemic, Kuk said.

"If the number of calories going in is the same over time, and there's a net gain, then obviously the way those calories are managed is different or something has changed," Kuk said. "Why that management of calories is changing is going to be important if we're going to reverse the trends."