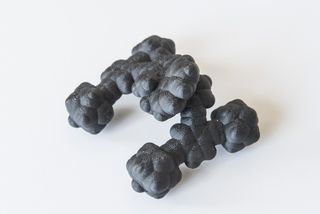 A 3D model of a possible molecular "nanocar." These single-molecule machines are propelled by small pulses of an electric current.
(Image: © Hubert Raguet/CEMES/CNRS Photothèque)

Tiny vehicles made from a single molecule will go head-to-head in the first ever NanoCar Race tomorrow (April 28), and the competition will be broadcast live on YouTube.

The race is made possible by a one-of-a-kind scanning tunneling microscope (STM) at the National Center for Scientific Research (CNRS) in Toulouse, France, that lets four users manipulate molecules on the same surface simultaneously. Four independently operated ultrafine metallic tips deliver electrical pulses that will propel the so-called "nanocars" along a racetrack made of gold atoms.

Six teams made it through to the final round, according to the race organizers. Originally, four teams were going to be selected earlier today to take part in tomorrow's race, but the organizers ultimately decided that all the teams should participate. This means two teams will control microscopes remotely from their own labs — one in Ohio and the other in Graz, Austria. [Magnificent Microphotography: 50 Tiny Wonders]

A live stream of the race will start at 10.45 a.m. local time in France (4:45 a.m. ET) on the competition’s YouTube page. If that start time is a tad early for you, there's no need to worry; the race could take up to 36 hours, so there will be plenty of time to tune in.

The event's organizers said it is more than just a spectacle. Viewers will be witnessing a major international science experiment on controlling single-molecule machines in real time, the organizers said.

"We don't really know with this technology what we will get out of it. Will it do classical things like motors or computers? We don't know," Christian Joachim, a senior researcher at CNRS and director of the NanoCar Race, told Live Science. "Right now, we are just opening up the technology and science."

Organizers said they hope these kinds of machines will one day allow researchers to construct devices atom by atom, which could have broad applications for everything from medicine to microelectronics. Navigating the racecourse will be a first demonstration of the ability to deposit and control multiple single-molecule machines on the same surface, Joachim said, a prerequisite for these kinds of future applications.

During tomorrow's race, each team will be given a specific sector of the gold racetrack and several of their nanocars will be placed on the course. This not a very precise process, though, and some of these cars will likely end up in other competitors' sections, so the teams will then have 6 hours to clean their sections, the race organizers said.

The teams will then have to map the position of gold atoms along their tracks so they can develop strategies for how to tackle the course.

All these movements have to be powered by electrical pulses, and pushing the nanocar with the microscope tip is forbidden, the race organizers said. While several of the nanocars taking part in the competition have similar layouts to conventional car designs (such as having wheels), others rely on completely different models of propulsion borrowed from things as varied as caterpillars, hovercraft and windmills.

The race enclosure will be cooled to minus 516 degrees Fahrenheit (minus 269 degrees Celsius) using liquid helium so that the molecules don't move spontaneously. But the helium reserves will run out after 36 hours, hence the time limit for the race, the organizers said. The winner will be the first team to reach the finish line or the one farthest along the track at the end of the allotted time, the organizers added.

It has taken more than three years for the teams to design their nanocars and for the organizers to prepare the racecourse, and Joachim said he is looking forward to taking a holiday after the race.

"It's like sending someone to the moon," he said. "Everything has to be synchronized, and you have to make sure everything is ready in time for D-Day. It is quite a large undertaking."