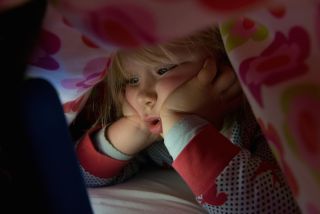 Toddlers are fiddling more with tablets and smartphones during the day, and it's robbing them of sleep at night, a new study from England suggests.

In the study, children ages 6 months to 3 years who spent more time playing with touch-screen devices during the day got less sleep overall and took longer to fall asleep, compared with the youngsters who used touch screens less frequently, the researchers found.

The findings also showed that compared with the kids who used touch screens less frequently, the babies and small children who used touch screens more often slept more during the day but less at night, according to the study, published today (April 13) in the journal Scientific Reports. [7 Ways to Short-Circuit Kids' Mobile Addiction]

This is the first study to look at the link between toddlers' touch-screen use and sleep, said lead study author Tim Smith, a lecturer in cognitive psychology at Birkbeck, University of London.

Although the use of smartphones and tablets is widespread, little was known about the extent to which infants and toddlers were using touch-screen devices in the U.K. before the researchers carried out their study, Smith said. Still, despite a dearth of studies on the subject, parents had been advised to limit their small children's screen time due to concerns about its possible negative effects on sleep, he noted.

In the new study, the researchers asked more than 700 families in the U.K. to complete an online questionnaire. This survey asked parents how often their youngsters played with a smartphone or tablet on a typical day. The parents also provided information about how much time their child spent sleeping, how often the child woke up each night and how long it took for the child to fall asleep.

Previous studies in children and teens have shown that there's a connection between increased screen time and both a later bedtime and less shut-eye each night. But scientists had a limited understanding of the effects of touch-screen use on sleep in young children.

The researchers didn't look into why more use of tablets and smartphones interfered with sleep in young children. Other research, however, has suggested some possible ways that more screen time can affect sleep in older children and teens, and these factors may also affect younger children, the researchers noted.

One explanation is that time spent using these devices cuts into the time available for older kids and teens to nod off, Smith told Live Science. In other words, instead of sleeping, adolescents are spending time on smartphones and tablets.

In addition, using touch screens can stimulate a child mentally and physiologically, making it more difficult for them to fall asleep and preventing them from sleeping as well as they otherwise would, Smith said.

Nor did the researchers look at whether the reduced amount of sleep in young children had a negative effect on their health, well-being or development, Smith said. But in future studies, the research team hopes to examine the long-term effects of touch-screen use on children's brains, development and cognitive abilities, he said. [11 Facts Every Parent Should Know About Their Baby's Brain]

In the meantime, Smith said, the best guidelines for parents on electronic media use in children comes from the American Academy of Pediatrics. The AAP advises limiting a child's overall use of these devices coupled with carefully supervising the activities that children are doing on these devices, he noted.

It's also a good idea for children to avoid using smartphones and tablets in the hour before bedtime, Smith added.