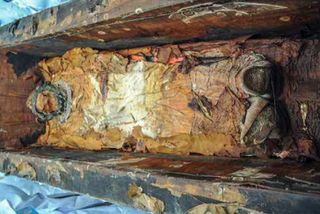 A silk-covered body inside a coffin and a silver bowl depicting Greek goddesses are among the discoveries at a 1,500-year-old cemetery in Inner Mongolia, an autonomous region in China.

The findings demonstrate the riches that were being traded at the time along so-called "silk roads," or trade routes that crisscrossed Asia and Europe, said the archaeologists involved in a series of digs excavating the cemetery between 2012 and 2014.

The archaeologists, who described their findings in the current issue of the journal Silk Road, said they suspect the cemetery belonged to a family of aristocrats, possibly the tribal chief of the Gaoche people, who, historical records say, fell under control of the Northern Wei dynasty. [See Photos of the Silk Road Cemetery and Coffin]

This dynasty, which reigned from A.D. 386 to 534, controlled much of northern China and Mongolia, giving the dynasty control over some of the silk roads.

The silver bowl found at the site has four projecting bosses (protrusions) at the bottom that "depict characters from Greek mythology: Zeus, Hera, Aphrodite and Athena," wrote Chen Yongzhi, director of the Inner Mongolia Museum; Song Guodong, an archaeologist at the Institute of Cultural Relics and Archaeology; and Ma Yan, a lecturer at Inner Mongolia University, in the journal article.

The bowl was likely imported from central or west Asia, the authors noted.

The archaeologists discovered six tombs at the cemetery, five of which date to the Northern Wei dynasty. (The other tomb is around 1,000 years old, dating back to the Liao Dynasty.)

Inside one of the Northern Wei tombs, the archaeologists discovered a silk-covered body. They have not yet removed the silk from the body and, as such, haven't been able to study the remains.

"The tomb occupant is wrapped in yellow silk and wears a gold headband, a gold necklace," as well as a gold belt, gold finger-rings and leather boots, the archaeologists wrote.

A painting on the outside of the coffin depicts a blue-roofed house held up with red pillars. "In the center of the house is seated the occupant surrounded by his many white-faced attendants, who are standing or sitting and wearing round hoods," the archaeologists wrote. "The exaggerated face and body proportions of the main occupant distinguish him sharply from the attendants."

The cemetery, the archaeologists said, has been repeatedly looted.