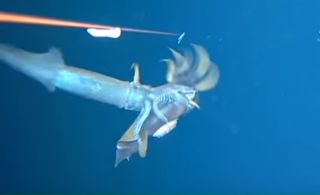 In the deep ocean, a hungry squid can suddenly become a meal for a larger squid, seen here in a still from a video posted by CSIRO on YouTube.
(Image: © CSIRO)

A marine expedition exploring life in the deep sea near Australia recently captured footage of an incredible scene: a squid's sneak attack on a smaller squid.

The two animals appeared on camera seemingly out of nowhere during the ship's video observation of a baited line. A squid that swiftly swam into the frame and grasped a piece of bait quickly and unexpectedly found itself to be the prey, when a second squid shot into the picture and embraced the smaller cephalopod in its tentacles.

The life-and-death struggle was visible for only a few dramatic seconds before the wrestling squids wriggled out of sight. [See Amazing Photos of Squid]

The scene played out March 19 at 11:51 a.m. local time, at a depth of 456 feet (139 meters), in front of an underwater camera mounted on an Australian research vessel dubbed Investigator. On April 3, the Commonwealth Scientific and Industrial Research Organization (CSIRO) shared the footage on YouTube, but at the time, information was not available about which squid species were tussling, a CSIRO representative told Live Science in an email.

Australia's Marine National Facility deployed the ship to an area of the Southern Ocean located southwest of Tasmania to collect data on the distribution of marine life inhabiting the top 3,300 feet (1,000 m) of the water column, theCSIRO representative noted.

Researchers on board the vessel are testing a new type of technology called a profiling Lagrangian acoustic and optical probe (PLAOS), which is designed to improve acoustical sampling of sea creatures that are difficult to collect, such as gelatinous animals and microscopic life. By documenting the movements, activity and diversity of sea life in these depths, scientists will gain a better understanding of the role these life-forms play in the ocean's carbon cycle, the CSIRO representative said.

While it may seem unexpected for a squid to fall victim to one of its own kind, it's relatively common for squid to dine on squid, according to a 20-year study that observed more than 100 squid in the Gonatus genus in waters off the coast of California. The study was published in the October 2016 issue of the journal Deep Sea Research Part I.

In that study, scientists found that the species Gonatus onyx had a noted affinity for cannibalism. After observing video of 109 individuals, the researchers estimated that about 42 percent of the squids' diet on average consisted of other G. onyx squid.