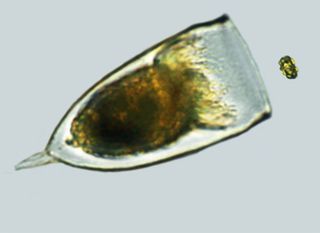 A tiny marine plant has been caught acting like an animal, find scientists who discovered a species of phytoplankton, a microscopic alga, could swim away from its predators.

Their finding could shed new light on what causes some colorful plankton blooms.

"It has been well observed that phytoplankton can control their movements in the water and move toward light and nutrients," marine scientist Susanne Menden-Deuer, of the University of Rhode Island, said in a statement. "What hasn't been known is that they respond to predators by swimming away from them. We don't know of any other plants that do this."

In lab experiments, Menden-Deuer and her team observed that groups of the phytoplankton Heterosigma akashiwo flee when in the presence of predatory zooplankton. What's more, the tiny plants swim away from areas that previously contained the predators even if the immediate threat is gone.

"The phytoplankton can clearly sense the predator is there," Menden-Deuer said. "They flee even from the chemical scent of the predator but are most agitated when sensing a feeding predator."

The algae do this to stay alive. If the phytoplankton have no place to hide, they'll get eaten up by their zooplankton predators within a day. But the algae double in population every two days if they have a refuge, the researchers said. If the same is true for other species of phytoplankton, this discovery could offer a new explanation for some plankton blooms.

"One of the puzzling things about some phytoplankton blooms is that they suddenly appear," Menden-Deuer said. "Growth and nutrient availability don't always explain the formation of blooms. Our observation of algal fleeing from predators is another mechanism for how blooms could form. Amazingly, looking at individual microscopic behaviors can help to explain a macroscopic phenomenon."

The study was published online Sept. 28 in the journal PLoS ONE.