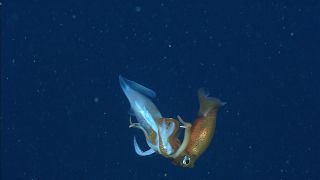 The deep-sea diving Gonatus squid has a hearty appetite, even when it comes to eating its own kind, a new study finds.

The cannibalism finding came about during a 20-year study (1995–2015) in which marine researchers used a remotely operated vehicle (ROV) to study and video-record the eating habits of more than 100 different squid of the Gonatus genus in Monterey Submarine Canyon, off the California coast.

In particular, two species of Gonatus squid — Gonatus onyx and Gonatus berryi — showed a voracious appetite for munching on their own species, the researchers said. In fact, after looking at video they took of 109 squid eating meals, researchers found 42 percent of the prey G. onyx ate were other G. onyx squid. [See Amazing Photos of Squid]

Cannibalism isn't uncommon in the deep sea, but this is the first time that scientists have proof that Gonatus squid engage in cannibalistic behavior, the researchers said. [See Video of the Cannibal Squid in Action]

They stressed the importance of having live-video evidence (in addition to stomach contents) of the cannibalism, since looking only at stomach contents of squid caught in trawling nets can be misleading. That's because squid and other marine creatures in trawling and jigging environments often become stressed and engage in unnatural behaviors, including cannibalism.

Though ROV lights and noises may also disturb marine creatures, in this study the researchers found that most of the prey capture happened before ROV the arrived, the researchers said.

The cannibalism isn't too surprising, as these squid need to eat nonstop, they said. Gonatus squid grow quickly, and have a metabolism that tops other cephalopods, including the octopus, cuttlefish and nautilus, the researchers said.

What's more, the squid's cannibalistic behaviors may help it reduce competition for food and mates, because if a squid eats a cousin that eats the same diet, there will be more food, as well as more mates, available, the researchers said.

Moreover, Gonatus squid spawn only once in their lifetimes, after which the female broods her batch of 2,000 to 3,000 eggs for up to nine months before dying. The female is unable to feed during this time, and relies on stored fats from earlier meals to survive, the researchers said. (Photos released in 2005 showing the brooding represented the first known instance of parental caring in squid.)

When Gonatus squid aren't busy dining on each other, they can be found eating deep-sea fishes, including lanternfish and owlfish.

To take down prey, the squid are equipped with two specialized feeding tentacles lined with suckers and large hooks. The hooks help the squid secure its prey, even if its choice dinner is larger than the squid itself, the researchers said. For instance, in 2014, scientists captured video of a Gonatus onyx squid in an hourlong battle with a much larger owlfish. The squid was victorious after using its sharp beak to cut through the fish's backbone.

The findings were published in the October 2016 issue of the journal Deep Sea Research Part I.