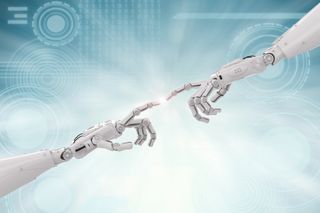 We might as well just give up control over the planet right now.   In recently published research, scientists detail a set of experiments in which robots — real, physical machines — improved themselves through a kind of digital Darwinism. The bots, each drawing from a collective "gene pool," competed with one another over multiple generations, gradually swapping genetic material in a process akin to sexual reproduction. The research article appeared in the journal Frontiers in Robotics and AI.   While this kind of evolutionary robotics research has been around a while, the new study presents an important step forward in assessing the evolutionary dynamics of physically embodied robots — and it suggests that we're mashing the fast-forward button on the impending robotic revolution.   Researchers from Vassar College set up an experiment in which 10 small-wheeled robots — all of them a model of the Ana BBot, manufactured by Johuco Ltd. — were issued the same task: to gather beams of light while avoiding certain obstacles. Each bot was also issued its own set of "genes" — a specific pattern of wires connected to pins on a circuit board.

RELATED: Stopping Killer Robots at the Source (Code)   It turns out that the experiment didn't reveal anything particularly dramatic. The robots didn't evolve better light-capturing or object-avoidance skills. But the experiment did reveal the importance of tracking the developmental factor in evolutionary robotics.    "It is important to note that our goal was not to show adaptive evolution per se, but rather to test the hypothesis that epigenetic factors can alter the evolutionary dynamics of a population of physically embodied robots," wrote Brawer and Hill.   Notably, all the bots had lost mobility entirely by the end of the experiment, since the mating algorithm allowed low-fitness individuals to remain in the gene pool and reproduce. So maybe there's still hope for us after all.