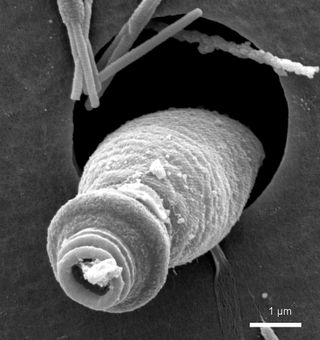 This microscope image of the dinoflagellate Polykrikos kofoidii shows the plankton's ballistic organelle called a taeniocyst. The taeniocyst explodes upon contact with prey.
(Image: © Urban Tillmann)

Single-celled organisms of the sea shoot their prey with Spiderman webbing and tiny Gatling guns.

Dinoflagellates called Nematodinium and Polykrikos are microscopic plankton, the kind of flotsam that whales gulp up by the ton. But these dinoflagellates, a type of protist, have their own drama-filled lives. They are hunters that eat other dinoflagellates, which themselves are bristling with armor, microscopic munitions and even chemical weapons.

Now, new research finds that the tiny weapons of Nematodinium and related dinoflagellates are their own invention: Though the weapons look a lot like the stingers of jellyfish, the structures evolved independently, possibly because an arms race has developed in a plankton-eat-plankton world.

"These might just be the cops of the ocean," said Gregory Gavelis, a postdoctoral researcher at Arizona State University who led the dinoflagellate research while at the University of British Columbia. "They just have an absurd amount of hardware to do their jobs." [Gallery: See Photos of the Tiny Weaponry of Plankton]

Dinoflagellates are "basically just objectively the coolest cells," Gavelis told Live Science. He previously discovered that Nematodinium has an eyespot with a lens and a light-sensitive pigment, suggesting that even though it's a single cell, it might, on some level, see.

Nematodinium's weird clusters of weaponry are called nematocysts. Gavelis and his colleagues used scanning electron microscopy (SEM) to image these nematocysts as well as the nematocysts of another well-armed dinoflagellate, Polykrikos kofoidii.

They also captured the firing of P. kofoidii's weaponry in high-speed video for the first time.

What they saw were some intricately complex structures: Nematodinium has nematocysts that are clustered in rosette shapes and look like the multibarrel configuration of a Gatling gun. [10 Secret Weapons of the Insect World]

"Nobody has ever seen these [creatures] hunt, because Nematodinium is super-rare," Gavelis said. "Unlike a Gatling gun, it probably shoots all of those capsules off at the same time."

Things got weird with P. kofoidii. This dinoflagellate, the researchers found, sports capsules on its surface, each of which is topped by a finger-like projection called a taeniocyst. When it comes into contact with prey, the taeniocyst explodes, perhaps shooting out an adhesive similar to Spider-Man's webbing, Gavelis said. The eruption of the taeniocyst, in turn, triggers the capsule, or nematocyst, to shoot out a coiled tube tipped with a pointy, dagger-like projection called a stylet. The stylet pierces its way out of the capsule and penetrates the prey. The coil dissolves, but the stylet is still attached to the predator dinoflagellate by a towline.

"It uses that towline, basically like someone pulling a harpooned fish to its demise," Gavelis said.

Then, it's snack time.

Gavelis and his colleagues looked at the genomes of the cnidarian Hydra and compared its genes for nematocysts with genes in single-celled organisms. They also compared the proteins found in cnidarians with those found in dinoflagellates.

There were no relationships. The genes that build nematocysts in dinoflagellates are entirely different from those that build them in cnidarians, Gavelis said. The new findings, published March 31 in the journal Science Advances, mean that cnidarians and dinoflagellates evolved similar-looking weaponry separately.

Gavelis suspects that dinoflagellates evolved such complex hunting equipment because they prey on dangerous game — other dinoflagellates. Polykrikos, for example, gobbles up the plankton responsible for toxic red tides. Protists that eat bacteria don't need major weaponry to do so, Gavelis said, but it's likely that dinoflagellate predators and prey are in an arms race for survival.

He and his team are now testing that hypothesis by trying to figure out if dinoflagellates develop more "guns" when the opposition is better-armed. If so, the company they keep should determine how many nematocysts they develop.