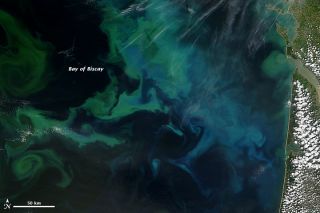 As weather warms up off the coast of France, blooms of plankton have once again begun to form, creating a beautiful, multicolored swirl visible from space.

NASA's Terra and Aqua satellites acquired these images of the colorful blooms on April 20 and May 4, according to  the NASA Earth Observatory. On the later date, a noticeably larger bloom occurred, fueled by nutrient runoff from French rivers and warmer temperatures in the Bay of Biscay.

Phytoplankton blooms provide food for a whole host of creatures, from zooplankton (small drifting animals) to whales. Through photosynthesis, the blooms harness the energy of the sun and turn carbon dioxide into sugars. Sometimes, however, they can cause problems: certain species of phytoplankton can form so-called red tides and produce neurotoxins that affect marine mammals as well as humans. And when they get too big, the blooms can create dead zones as the algae sinks and decomposes, consuming oxygen.

The blooms can also have beneficial environmental effects. According to a study published last summer in the journal Science, phytoplankton blooms absorb about one-third of the carbon dioxide humans emit into the air each year through burning fossil fuels.

Various pigments produce the colors of the phytoplankton blooms. For example, a type of algae called Coccolithophores makes a calcium-containing shell that creates a milky appearance, according to the Earth Observatory.