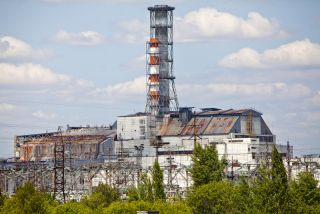 WASHINGTON — When 10 people in New York City developed a very rare form of eye cancer over just a four-year period, doctors were puzzled. The cancer, called vitreoretinal lymphoma, had been diagnosed in the U.S. only a handful of times over the previous 20 years.

The doctors tried to figure out what might have caused this rare cancer in these 10 patients, all of whom were diagnosed between 2010 and 2013, and they discovered that six of the patients had an interesting connection: They all had lived near the Chernobyl Nuclear Power Plant.

The Chernobyl disaster is considered the worst nuclear power plant accident in history: On April 26, 1986, an explosion occurred at the plant in Ukraine, leaking massive amounts of cancer-causing radiation into the atmosphere. [Cancer-Fighting Diet: 6 Tips to Reduce Your Risk]

Vitreoretinal lymphoma is a type of eye cancer that affects white blood cells in the retina, the optic nerve or the vitreous humor (the gel-like substance found inside the eye), said Roxana Moslehi, a genetic epidemiologist at the University at Albany, State University of New York, and the senior author of the study on the New York cases. The doctors who diagnosed the cancers had reached out to Moslehi when they realized they were seeing something strange happening with the rates of this cancer, she said.

Moslehi set out to determine if the cases of vitreoretinal cancer represented a "cluster" — in other words, a group of cases that are close together in time and location and occur at higher rates than expected. She presented her findings here today (April 2) at the American Association for Cancer Research's annual meeting. The findings have not been published in a peer-reviewed journal.

Based on data from the New York State Cancer Registry, Moslehi found that statistically, there should be only one case of vitreoretinal lymphoma in New York state in a four-year period. So to find 10 cases in New York City alone in that same time period was certainly "unanticipated," and represented a cluster, she said. Moslehi also looked at national rates of the disease, and also found incredibly low rates.

To figure out what could be causing this cluster, the researchers looked for commonalities among the patients, Moslehi said. They noted that eight of the 10 were of Ashkenazi Jewish descent, she said.

"It was very surprising to discover this," Moslehi told Live Science. The cause of vitreoretinal lymphoma is unknown, "so any clues that you get as to possible causes make you very excited," she said. [10 Do's and Don'ts to Reduce Your Risk of Cancer]

Indeed, in looking through the literature, the researchers found several studies linking other types of lymphoma to exposure to radiation, Moslehi said. For example, clean-up workers at Chernobyl have been shown to have higher rates of a type of cancer called chronic lymphocytic leukemia, she said. In addition, rates of leukemia in children and adults are increased in people who were exposed to either Chernobyl or the atomic bombs that the U.S. dropped on Japan during World War II, she said. (Both leukemia and lymphoma affect white blood cells.)

The New York City patients who had lived near Chernobyl ranged in age from 62 to 85 at the time of their diagnosis, according to the case report. The diagnoses took place between 24 and 27 years after the nuclear disaster, meaning that a number of the patients were in their late 30s when the disaster took place. Moslehi is still looking at the cases in the other four patients, who did not live near Chernobyl, for clues in those cases, she said.

Moslehi noted that they "still cannot link this disease or lymphoma to radiation per se" — more studies are needed to fully understand the cause. For example, it may be that Ashkenazi Jews are more susceptible to the effects of radiation, she said.

Editor's note: This story was corrected from the original version. The Israeli cluster had myeloproliferative disorders, not vitreoretinal lymphoma.