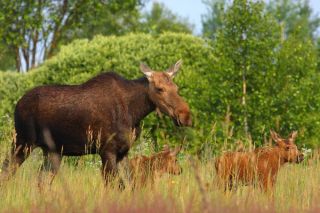 Almost 30 years after a horrific accident at the Chernobyl Nuclear Power Plant released massive amounts of radiation and became one of the world's worst nuclear catastrophes, the long-abandoned site has some new inhabitants: New research finds that many native wildlife species are once again finding refuge in the human-free Chernobyl Exclusion Zone in Ukraine.

Scientists found that the numbers of moose, roe deer, red deer and wild boar living in the Chernobyl Exclusion Zone — a roughly 1,000-square-mile (2,600 square kilometers) designated area of contamination around the disaster site — are similar to the animals' population numbers in nearby uncontaminated nature reserves. In fact, they noted that wolf census data in the area has a population seven times greater than populations in nearby reserves.

The researchers examined long-term census data compiled from helicopter surveys (from 1987 to 1997) and animal track surveys, in which scientists recorded animal tracks in the region over several years. [Images: Chernobyl, Frozen in Time]

In 1986, a reactor at the Chernobyl Nuclear Power Plant exploded, triggering a fire and unleashing clouds of radioactive particles that contaminated the area surrounding the power plant for at least an 18-mile (29 km) radius, according to the World Nuclear Association, an international organization that supports the nuclear energy industry.

Residual radiation from the nuclear meltdown forced a massive human evacuation from the area, but the new findings suggest that some wildlife species have started to call the area home over the past decade.

The researchers suspect that wildlife initially returned to the area because it has been largely undisturbed by humans, which has allowed many species — larger mammals, in particular — to thrive, according to Jim Smith, the study's observation team coordinator and a professor of environmental science at the University of Portsmouth in the United Kingdom.

"This doesn't mean radiation is good for wildlife, just that the effects of human habitation — including hunting, farming and forestry — are a lot worse," Smith said in a statement.

However, some scientists think the scope of this study was too limited. Timothy Mousseau, a professor of biological sciences at the University of South Carolina who was not involved in the new study, told NBC News that he thought the study did not address the effect that radiation has on animal populations and didn't have a control group (a group in an experiment or study that does not receive treatment or, in this case, exposure to radiation) to compare the results to those of typical populations.

Overall, the wildlife population around Chernobyl is much lower compared to that in other protected regions in Europe, which seems to indicate that radiation is having an observable effect on the wildlife, he added.

After the March 2011 nuclear leak at the Fukushima Daiichi Nuclear Power Plant in Japan, researchers closely examined animals that were exposed to radioactive particles from the disaster. Scientists reported radiation-related mutations in local butterfly populations, notably pale grass blue butterflies. A 2014 study published in the journal Scientific Reports also showed signs of radiation exposure in the blood of Japanese monkey species, and scientists think it's likely this exposure will make the monkeys more susceptible to infectious disease.

The new study did not include information about the health or reproductive success of different animal species, although the researchers did note that the population numbers didn't seem to be influenced much by animal migration. Moreover, Smith and his colleagues didn't closely observe lifestyle habits that may explain how residual radiation affects wildlife that has come back to Chernobyl.

The new study was published online Oct. 5 in the journal Current Biology.