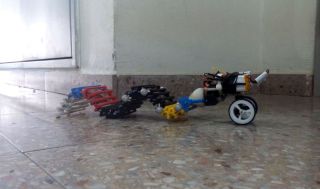 The SAW robot could one day be miniaturized and sent to slither through the intestines to provide views of the interior spaces.
(Image: © David Zarrouk)

A tiny, swallowable robot that snakes its way through the small intestines could one day be used to actively visualize the digestive system.

The robot, called SAW (single actuator wave-like robot), moves in a wave-like motion and can travel through the extremely squishy environment of the small intestine.

"The external shape of the robot is a 2D projection of a rotating helix. The result is a continuously moving wave. We can simply reverse the direction by reversing the direction of rotation of the motor," said one of the robot's inventors, David Zarrouk, a mechanical engineer at Ben-Gurion University of the Negev. [11 Surprising Facts About the Digestive System]

The team was hoping to create an ingestible robot that could carry a camera through the small intestines, which could ultimately be used for colonoscopies. Currently, colonoscopies can access only the large intestines. There are pill cameras that can reach the small intestines, but they float passively through the digestive system, meaning they typically take 12 hours to travel its entirety. What's more, the pill cameras can sometimes get stuck at certain points in the intestines, at which point the battery dies, leaving no data for a doctor to analyze. Passive camera pills also can't take tissue samples, Zarrouk added.

Initially, the team members created an inchworm-like robot that crawled through tight spaces. But they found it wasn't ideal for traveling through serpentine lengths of the intestines.

So, the team looked for inspiration in the natural world. Snakes move in a smooth, undulating wave that, they reasoned, could be used to quickly cover large distances. In the end, they settled on a fairly simple design that used just one motor and was based on the notion of a rotating helix, Zarrouk said. The snake-like robot is made from a set of interlocking 3D-printed "plastic" pieces that look a bit like vertebrae. In tests, it seems to move incredibly fast and can cross a wide array of terrains, from water to rough, rocky soil.

So far, the team has made simple mock-ups using 3D printers and a plastic-like material that would be unsuitable for true biological applications. They also have to make sure it wouldn't get stuck in the curvy portions of the intestines, and that the robot can climb upward at points where the intestines snake up, he added

Once those kinks are resolved, and they are ready to test the robot in living creatures (such as pigs), the team would need to switch to a more human-friendly material.

"One possible material would be biocompatible latex, which is a flexible but durable material," Zarrouk told Live Science. The robot is currently much bigger than the small intestines, but shrinking it to a size that could be swallowed by a human (with a sedated gag reflex) is relatively straightforward, he added.

"In theory, if the robot is small enough — smaller than the valve of the stomach, lower esophageal sphincter and the exit of the stomach pyloric part — and doesn't disintegrate, there is no significant risk," Zarrouk said. That's because the stomach's natural peristaltic motion would gradually inch the robot out of the intestines and it would be passed with the next bowel movement, he said. Given that, it's also key to ensure that the robot has no sharp edges that could cut the delicate tissue of the intestines, he added.

Another tricky factor was recreating the squishy properties of the intestines. So the team has engineered a foam-like material with many tiny holes that is much more stretchy than ordinary rubber.

Once they have miniaturized the robot and made it out of safe materials, they could test it in the intestines of pigs, Zarrouk said.

The simplest version of the robot would hold a camera and could be steered by doctors through the intestines to look at certain spots. But in the long term, the team envisions putting small cutting tools on the robots to conduct biopsies, and even a tool to cauterize (or burn) damaged tissue to stop bleeding, Zarrouk said.