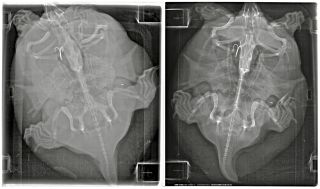 Swallowed fishhooks are a deadly threat to freshwater turtles, and until now, this danger was largely unexplored. A new study, however, finds that in some species, the likelihood of a turtle dying from a swallowed fishhook is as high as 11 percent, and that the frequency of turtle deaths from fishhooks would be enough to nudge vulnerable turtle populations into decline.

Threats to sea turtles from commercial fishing — such as swallowing hooks — are well-documented, but far less is known about how recreational fishing and the threat of swallowed fishhooks impacts freshwater turtles.

Recently, researchers evaluated data from multiple studies to calculate the probability of freshwater turtles ingesting fishhooks, how often that would prove to be fatal, and how deaths from swallowed hooks could affect turtle population numbers. [Fishhooks Threaten Freshwater Turtles | Video]

Prior research suggested that hook ingestion in freshwater turtles is more widespread than scientists had suspected. In 2014, scientists gathered X-rays of more than 600 turtles representing four species, and found fishhooks in 33 percent of the animals. Another survey detected evidence of hooks in 36 percent of alligator snapping turtles in one Florida river, the authors reported in the new study.

"If you ask anyone who's gone fishing with live bait, there's a chance they've hooked a turtle," study co-author David Steen, an assistant research professor in the Department of Biological Sciences at Auburn University Museum, told Live Science.

"But there hasn't been an opportunity to look at this on a grand scale and see what's been going on," Steen said.

In sea turtles, interactions with commercial fishing gear, including hooks, is known to be frequently deadly, with mortality rates of up to 82 percent, the authors wrote in the new study. But relatively little has been done to better understand how freshwater turtles are affected when they swallow fishhooks.

"So we took the data from sea turtles and applied it to freshwater turtle populations," Steen said.

Steen and study co-author Orin J. Robinson Jr., a postdoctoral researcher with the Cornell Lab of Ornithology at Cornell University, modeled estimates for freshwater turtle mortality based on sea turtle mortality rates. Then, they combined those estimates with long-term data on turtle life histories in known populations, to see if they would be significantly affected by the deaths.

Turtles in the wild produce a lot of young, but many of their babies die before reaching adulthood, so high survival rates among adults — which can live for many decades — help to keep populations stable, Steen said.

However, if the mortality rates among adults go up, it can lead to a population decline. And the computer models showed that deaths from fishhooks would be significant enough to cause turtle populations to drop, the researchers said.

Freshwater turtles are known to face threats from human activity, such as habitat loss and overharvesting for food and pet trades, and the new findings suggest that fishhook ingestion should be added to that list, Steen told Live Science.

"Sea turtles have been a subject of study for many years, and people have come up with strategies to protect them from bycatch," Steen said. "Policymakers and land managers might consider whether they should be regulating or monitoring the type of fishing that's going on in areas with vulnerable freshwater turtles."

The findings were published online March 15 in the journal Conservation Biology.