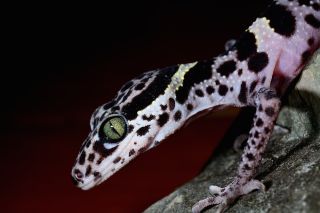 Researchers chose not to publish the location of the newly identified cave gecko species Goniurosaurus kadoorieorum for fear that exotic pet trade poachers would wipe out the critters.
(Image: © Copyright Kadoorie Farm and Botanic Garden | Photo by Jian-Huan Yang)

The moment he laid eyes on the geckos — creatures with remarkable green eyes and zebralike stripes speckled with yellow — Jian-Huan Yang knew they were special.

The conservation officer at the Kadoorie Farm and Botanic Garden in Hong Kong had discovered two new gecko species in China. He knew his glee would be felt by others, though for different reasons — some nefarious. Recently, commercial collectors have been using reports of such new species in scientific journals as tools to track down the newbies so they can sell them for a profit on the exotic pet trade market.

So, Yang kept the geckos' location a secret, even when he co-wrote a study describing the two newfound species. [Photos: Best Wild Animal Selfies]

"We do not disclose the collecting localities of these restricted-range species in this publication," Yang wrote in the 2015 study, published in the journal Zootaxa. He explained that geckos are popular novelty pets, and scientific papers like his were helping commercial collectors drive them to near extinction.

Yang's caution isn't unfounded. He and his colleagues described two other new species of cave gecko that live in southern China: Goniurosaurus yingdeensis (published in 2010) and Goniurosaurus liboensis (published in 2013). He also gave their exact locations, as is typical when newly identified species are introduced into the scientific literature.

"Shortly after, some collectors began collecting these geckos for sales using the location information in my papers," Yang told Live Science in an email. "It has been saddening to see a constant supply of wild-caught individuals of both species are now available on the pet trade and even traded overseas to the United States and Europe."

In 2006, four researchers wrote a letter to the journal Science explaining that the race to document and understand previously unknown species "in the face of a global biodiversity crisis" has turned studies into "a treasure map for commercial collectors."

The demand for wild animals isn't going away.

Since being scientifically described in the 1990s, the Indonesian turtle Chelodina mccordi and another cave gecko (Goniurosaurus luii) fetch pet trade prices ranging from $1,500 to $2,000 apiece, the researchers said. The demand is so high that C. mccordi is almost extinct in the wild, and G. luii has gone locally extinct.

Likewise, the salamander Paramesotriton laoensis in northern Laos costs between $170 and $250 each on the black market, the researchers said. Smugglers often offer villagers less than $1 to collect the black-and-yellow Laotian newt (Laotriton laoensis), and then turn around and sell each one for as much as $200, according to the BBC.

Researchers worked with government officials to make collecting these wild newts illegal, a step that appears to be one of the few ways to protect these animals from the pet trade, Yang said. He hopes to secure such protections of the cave geckos in the future.

Protecting rare species with international and national lists and laws, such as the Convention on International Trade in Endangered Species of Wild Fauna and Flora (CITES), may help these animals survive, Yang said. Meanwhile, the public can help by refusing to buy wild-caught rare and endangered animals as pets, he said. [The 10 Strangest Animal Discoveries of 2015]

Despite the risks of revealing a newfound animal's location, many researchers still publish that information. This data can help researchers understand how a previously unknown species fits into the ecosystem and the size of its habitat range.

That leaves Yang and his colleagues, including a team that withheld the location of the newfound mountain spiny newt (Echinotriton maxiquadratus), in the minority.

"This is not a growing trend — [Yang's study] is a few in tens of thousands. Most studies provide full location details," said Zhi-Qiang Zhang, the chief editor of the journal Zootaxa, a publication known for its studies on newfound species.

Yet, Zhang said he understands the benefits of withholding an animal's locality. Researchers such as Yang make it known that they will share the withheld location with colleagues who make formal requests.

While withholding the information makes him uncomfortable because it leaves out critical information about the new species, Yang said he'll continue to do so until better protections for these animals are in place.

For now, "it may be the best way to protect them," Yang said.