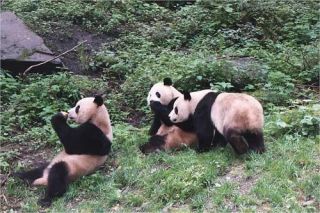 Pandas in captivity at the China Center for Research and Conservation of the Giant Panda in Wolong eat nutritious bars in addition to bamboo.
(Image: © Sue Nichols, Michigan State University)

Wildlife-conservation areas are not protecting the species considered both unique (with few close relatives) and endangered, according to new research that maps these species against current preserves.

Only 5 percent of conservation areas are prime living areas for so-called Evolutionarily Distinct and Globally Endangered (EDGE) mammals, such as the black-and-white ruffed lemur, researchers found. Furthermore, only about 15 percent of EDGE reptiles are protected in current preserves and other areas set aside to protect species.

The findings — highlighted in a new map that shows where EDGE species need protection — illustrate a challenge that conservationists face worldwide: how to allocate what limited resources exist to best ensure maximum biodiversity in a given region, the researchers said.

"These areas highlighted should all be global conservation priorities because they contain species that are not only highly threatened, but also unique in the way they look, live and behave," said Jonathan Baillie, director of conservation at the Zoological Society of London and a team member on the new study. [In Images: 100 Most Threatened Species]

"These new maps will inform the development of larger-scale work to help secure the future of some of the most remarkable species on Earth," Baillie said in a statement.

Extinction is not random

The researchers are among those advocating a newer approach to protection: figuring out how a species contributes to evolutionary history, not just those whose numbers are scarce. Species that are unique would have a higher value than those that are not.

Although this approach would require extra effort to protect many unique species, instead of those with similar evolutionary histories, the researchers cited previous work indicating the distinct animals may "play a disproportionate role in ecosystem functioning," given their unique traits. The implication: These unique species may be necessary to keep an ecosystem healthy.

Furthermore, the process of going extinct is not random, the researchers said. Species that are closely related to one another often face the same threats, particularly if they are large, live a long time, reproduce slowly and have very specialized habitats. (This problem is exemplified by the situation of the giant panda, which feeds on bamboo only in certain areas of China.)

While areas such as the Amazon rainforest and Southeast Asia are losing diversity more rapidly than would be expected by random extinction, nongovernmental organizations and conservation groups don't often place a higher priority on species that are more unique than others, the researchers noted.

EDGE species are determined by scores given to species based on how distinct their lineage is in evolutionary history and the extent of their global endangerment. Those with an above-average unusual lineage that are critically endangered, endangered or vulnerable are placed on the EDGE list, which has been in use since 2007.

Currently, there are 502 EDGE mammal species and 799 EDGE amphibian species. In addition, conservations have identified certain other species that have an unclear conservation status (not enough is known about them to rate their extinction risk).

The new research plotted close to 20,000 species (including those with high EDGE scores) against a range map of "Red List" endangered species maintained by the International Union for Conservation of Nature. (The Red List is different from the EDGE list in that it looks at whether a species' population numbers allow it to be viable in the wild, as well as the threats to it from human activity. The species' uniqueness doesn't affect whether it is put on the Red List.) Additionally, researchers statistically weighted the species to plot their threat of extinction more proportionally to their observed range.

The new work indicates that conservation priorities should focus on Southeast Asia, southern Africa and Madagascar for mammals, and Central and South America for amphibians.

The research, published in the May 15 edition of the journal PLOS One, was led by the Max Planck Institute for Ornithology in Seewiesen, Germany, and includes contributions from the Zoological Society of London and other research institutions in Germany and the United Kingdom.