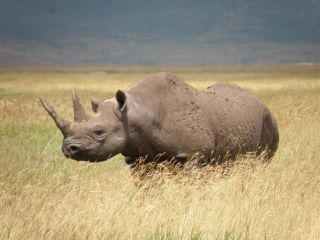 Despite the action of conservation programs, 25 percent of mammals are at risk of extinction, according to a new IUCN report. For example, the reassessments of several rhinoceros species show that the subspecies of the black rhino in western Africa, the western black rhino has officially been declared extinct.
(Image: © Dr. Richard Emslie/IUCN)

About one in four mammal species are at risk of extinction, and the Western black rhino has officially been declared extinct, according to a new assessment of biodiversity by the International Union for Conservation of Nature (IUCN) and partners.

For the latest update, researchers assessed the status of 61,900 species of plants and animals.

The reassessments of several rhinoceros species show that the subspecies of the subspecies of the white rhino in central Africa — called the Northern white rhino (Ceratotherium simum cottoni) — is currently teetering on the brink of extinction and has been listed as "Possibly Extinct in the Wild." A subspecies of Javan rhino (Rhinoceros sondaicus annasmiticus) is probably extinct, following the poaching of what is thought to be the last animal in Vietnam in 2010. While this doesn't mean the end of the Javan rhino, it reduces the species to a single, declining population on the island of Java.

The assessment also showed an alarming 40 percent of Madagascar's terrestrial reptiles are threatened. The 22 Madagascan species currently identified as critically endangered, which include chameleons, geckoes, skinks and snakes, are now a conservation challenge, researchers say. New conservation areas being designated in Madagascar are expected to help conserve a significant proportion of these critically endangered species, such as Tarzan's chameleon (Calumma tarzan), the bizarre-nosed chameleon (Calumma hafahafa) and the limbless skink (Paracontias fasika). [Photos of IUCN wildlife]

"The IUCN Red List is critical as an indicator of the health of biodiversity, in identifying conservation needs and informing necessary changes in policy and legislation to drive conservation forward," Jean-Christophe Vié, deputy director of IUCN's Global Species Program, said in a statement. "The world is full of marvelous species that are rapidly moving towards becoming things of myth and legend if conservation efforts are not more successfully implemented."