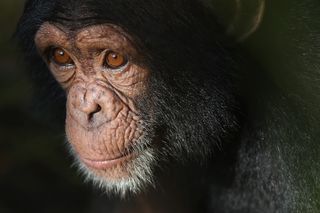 Chimps are our closest primate relatives, but should they be given the same legal rights as people?
(Image: © Dan Kitwood/Getty)

Should chimps have legal rights? A case debating the "personhood" of two captive male chimpanzees recently had its day in court, at the New York County Supreme Court's Appellate Division in the First Judicial Department.

On March 17, judges heard arguments from Steven Wise, president of the Nonhuman Rights Project (NRP) and the case's lead attorney, about recognizing the chimps — who are both residents of New York State — as legal persons. This would entitle them to freedom from captivity under New York's habeas corpus statute, which protects people from being detained involuntarily. [8 Human-Like Behaviors of Primates]

Wise claimed that habeas corpus, a fundamental human right, should not be restricted to people. He called for the chimpanzees — named Tommy and Kiko — to be freed from their cages and released to live in a Florida sanctuary, NRP representatives said in a statement.

NRP lawyers first filed lawsuits requesting personhood for Tommy and Kiko in 2013. Tommy was born in captivity and appeared in the 1987 film "Project X." The chimp was kept by his owner in Gloversville, New York, on a used trailer lot, where he lived alone in a cage inside a shed, with "concrete walls painted to look like a jungle" and only a television set for company, according to an NRP client description.

Kiko inhabits a cage in a cement storefront attached to his owners' home in Niagara Falls, New York. He is partly deaf as a result of physical abuse he received at the hands of three trainers during the filming of the 1989 TV movie "Tarzan in Manhattan," and has been photographed with a chain and padlock around his neck, NRP reported.

The courts ruled against Tommy and Kiko in 2013, and the decisions were appealed and denied in 2014. At Tommy's hearing, a panel of three judges claimed that there was no legal basis for considering nonhuman animals to be people. To be considered legal persons, chimpanzees would need to bear "legal responsibilities and societal duties," the judges stated in their decision.

But in the new appeal, Wise told the court that the earlier ruling was "irrational" and "not backed up by science," because chimps hold responsibilities and duties within their own communities. Studies have shown that close to 40 behaviors are acquired by individual chimps through social interactions within a troop, including tool use, grooming techniques and courtship rituals.

The members of the court will hand down their decision in five to eight weeks, NRP reported. Meanwhile, Wise remains hopeful for his clients' chances.

"The reasons that humans have rights are the same as to why nonhumans should have rights. I am eternally optimistic," he said in a statement following the hearing.