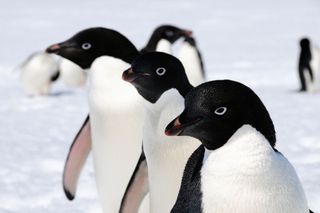 Researchers had estimated that about 2.3 million Adélie penguins called East Antarctica home. But a new survey more than doubles that estimate, to 5.9 million individuals in that area.

A team of scientists completed a comprehensive count of the penguin population using aerial and ground surveys, tagging data and automated cameras during several breeding seasons.

The new estimation is the first to take into account nonbreeding penguins; previous population counts focused only on breeding pairs. [In Photos: Adélie Penguins of East Antarctica]

"Nonbreeding birds are harder to count because they are out, foraging at sea, rather than nesting in colonies on land," Louise Emmerson, a seabird ecologist with the Australian Antarctic Division of the Australian government's Department of the Environment and Energy, said in a statement. "However, our study in East Antarctica has shown that nonbreeding Adélie penguins may be as, or more, abundant than the breeders. These birds are an important reservoir of future breeders, and estimating their numbers ensures we better understand the entire population's foraging needs."

Based on the new estimation of 5.9 million Adélie penguins in East Antarctica, the global population of this species (Pygoscelis adeliae) is likely 14 million to 16 million birds, the researchers said. (This species lives along Antarctica's entire coast and on its small islands.)

The study also revealed that, as the penguins seek out rocky, ice-free areas in which to nest, the birds move closer to human activity. Research stations in Antarctica similarly require rocky, ice-free spots because they provide easier access to resupply vehicles. There are nine permanently occupied research stations in such areas of East Antarctica, and the researchers found that more than 1 million birds breed within about 6 miles (10 km) of a station.

"By identifying significant penguin breeding populations near stations, we can better identify which areas may need enhanced protection into the future," said lead author Colin Southwell, a seabird ecologist with the Australian Antarctic Division.

By better understanding penguin population numbers and threats to their environment, conservationists can also help protect the penguins' food chain. Researchers estimate that Adélie penguins eat about 193,500 tons (175,500 metric tons) of krill and 18,000 (16, 300 metric tons) tons of fish during each breeding season. With these more comprehensive estimates, organizations such as the Commission for the Conservation of Antarctic Marine Living Resources can set sustainable fishery catch limits to ensure the population remains stable, the researchers said.

The findings have yet to be published in a scientific journal.