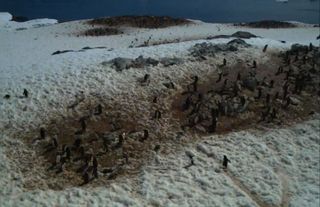 Gentoo penguins use their dark guano to melt snow on the Antarctic Peninsula.
(Image: © University of Oxford, Screengrab)

Gentoo penguins have given the term nesting a whole new meaning.

The penguins poop on their frozen landscape in the Antarctic to melt it, creating the ideal location to rear their young when the time comes, new video footage suggests.

Though most humans wouldn't consider poop an appropriate decoration for a child's nursery (although it is certainly a common element in them), poop seems to play a key role in penguins' breeding behavior. This poop "landscaping" is probably unintentional: The birds most likely aren't considering the feng shui of their feces and deliberately pooping to make room for their chicks' nurseries, researchers said.

The new insight came from thousands of hours of video taken by researchers from the University of Oxford in England, along with the Australian Antarctic Division. The researchers spent a year videotaping the behavior of a colony of Gentoo penguins on Cuverville Island, off the Antarctic Peninsula. The team also used snow gauges to measure how fast snow melted as the tuxedo-clad birds came and went.[See Video of the Penguin's Poop Landscaping]

The frosty region is usually blanketed by snow and ice, but that changed at certain times of the year. The birds aggregated in large groups, leaving huge piles of guano, or poop. The dark color of the poop allowed the light from the weak Antarctic sun to be more quickly absorbed.

That, in turn, fueled the melting of the ice and left a lot of bare rocky shelters — perfect nesting grounds for rearing their adorable penguin chicks.

Gentoo penguins, or Pygoscelis papua, are among the rarest of the Antarctic birds, with fewer than 300,000 breeding pairs on the icy continent, according to the British Antarctic Survey.

The birds, like many other penguins, are monogamous, usually mating with the same partner year after year. Each female penguin lays just two eggs for the season, so it's no surprise that they aggressively protect their eggs, according to the British Antarctic Survey.

The penguins tend to place their eggs on hilltops and open beaches, collecting bits of pebbles and other objects from their surroundings for their nests.