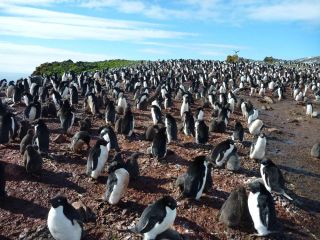 There is a new culprit in the mysterious loss of Adélie and chinstrap penguins living along the West Antarctic Peninsula. Declines in krill, the small, shrimp-like crustacean that feeds many other animals in the Antarctic waters, may be starving young penguins, a long-term study indicates.

The krill, in turn, appear to be losing out, at least in part, because of declining winter sea ice, which provides them with algae to eat, the researchers say. This region has warmed markedly since the middle of the 20th century.

"This is one of the great examples of how very small changes — what a guy on the street might consider not-too-dramatic — can have tremendous impacts in certain systems," said Wayne Trivelpiece, a wildlife biologist with the National Oceanic and Atmospheric Administration.

The return of seals and whales, also krill eaters, may also be a factor, according to Trivelpiece and his colleagues. [Album: Life at the South Pole]

The research changes the role scientists think sea ice plays in the declines of these penguins. From the late 1970s through the early 1980s, penguin observers saw about half of the young birds of both species return a few years after hatching to breed. The species appeared to be at odds: Chinstraps that typically prefer to spend the winters feeding in open water, flourished after warmer years; meanwhile, ice-loving Adélie penguins benefited from cold winters.

These trends directly implicated changes in sea ice for fluctuations in the penguin populations.

Then, after 1986, something changed and scientists saw a sharp decline in the number of young from both species that returned to breed. Now, 10 percent or fewer return, according to Trivelpiece.

This indicated that changes in sea ice were not directly responsible. To figure out what was going on, Trivelpiece and colleagues began monitoring the birds' diets.

"We began looking at what sizes of krill they were eating. One year, most of the krill would be of a single size class, 30 to 35 millimeters (1.18 to 1.38 inches). Next year all would be in the 40 to 45 millimeters (1.55 to 1.77 inches) size," he said. The krill the penguins eat kept getting larger because no young krill were entering the population; in a productive year for krill, the penguins' meals would contain both older and young krill.

This means progressively leaner pickings for penguins until a good year occurred. Overall, the scientists estimated a decline in krill density of as much as 80 percent from the mid-1970s to the present.

So, why the declines in krill?

Trivelpiece and his colleagues have a couple of ideas to explain the loss of krill. Humans may have inadvertently given penguins greater access to krill by hunting their krill-eating competitors, including whales and seals. These marine mammals are now recovering and eating more krill. Meanwhile, humans are also catching progressively more krill to create products like dietary supplements, they write in a study published in the most recent issue of the journal Proceedings of the National Academy of Sciences.

The loss of sea ice is also likely to be indirectly responsible.

The researchers studied penguins at sites in the South Shetland Islands, near the northern tip of the West Antarctic Peninsula — a region that is warming rapidly. Between about 1950 and 2000, the average winter temperature has risen by 9 to 10.8 degrees Fahrenheit (5 to 6 degrees Celsius) and satellite data from the early 1970s shows corresponding declines in winter sea ice. Other research has documented declines among these species elsewhere along the Antarctic Peninsula and the nearby Scotia Sea.

Young krill depend on algae growing on the sea ice for food during the winter. Without the sea ice, they have nothing to eat.

The northern reach of the peninsula makes it particularly vulnerable to climate change. A 5-degree Celsius change in temperature wouldn't make as much difference farther south, where the warmer temperatures would still fall well below freezing and have no affect on sea ice, Trivelpiece said.

"It really is where the peninsula is. It is just far enough north where the mean temperatures in winter are at that sharp edge of the boundary line, from just below the freezing line to just above," he said.

The first documented disappearance of a colony of Emperor penguins, which unlike chinstraps and Adélie, nest directly on the ice, prompted speculation that climate change in the region was responsible. While sea ice is not in decline throughout all of the Antarctic waters, ultimately, the continent's sea ice is expected to shrink significantly.