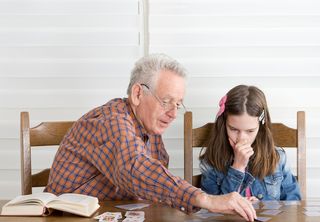 Your brain may start aging at a dramatically faster rate when you hit age 65 — or it may not, depending on which version of a particular gene you have, a new study suggests.

In the study, scientists identified a gene that appears to control the speed at which the brain ages, and they say that a particular version of it may offer protection against a host of age-related neurological diseases, including dementia. [7 Ways the Mind and Body Change With Age]

The gene, called TMEM106B, kicks into action at about age 65. Soon after that, people with bad copies of this gene will have a brain that looks 10 to 12 years older than people of the same age who have working copies, the scientists said.

The discovery may allow doctors to identify which people are at an increased risk for neurological diseases by virtue of having a faulty TMEM106B gene. It also may help develop drugs that target this gene to promote healthier brain aging, the researchers said. The study describing this work appears today (March 15) in the journal Cell Systems.

"But those genes explain only a small part of these diseases," said study co-leader Herve Rhinn, an assistant professor of pathology and cell biology in the Taub Institute for Alzheimer's Disease and the Aging Brain at Columbia University Medical Center in New York. "By far, the major risk factor for neurodegenerative disease is aging. Something changes in the brain as you age that makes you more susceptible to brain disease."

The genetic-based instructions expressed by TMEM106B may be that "something," Rhinn said. The instructions may either protect against or accelerate the ravages of aging. [6 Big Mysteries of Alzheimer's Disease]

"If you look at a group of seniors, some will look older than their peers, and some will look younger," said Dr. Asa Abeliovich, a professor of pathology and neurology at the Taub Institute and a co-author of the study. "The same differences in aging can be seen in the frontal cortex, the brain region responsible for higher mental processes."

Previous studies have associated TMEM106B with a rare form of dementia called frontotemporal lobar degeneration. However, the new study shows that the TMEM106B gene is more broadly associated with brain age, and underlies how well seniors maintain their cognitive abilities, according to Rhinn and Abeliovich.

To determine what might control brain aging, the two researchers analyzed genetic data from more than 1,200 autopsied human brains from people who had not been diagnosed with a neurodegenerative disease while alive. They focused on a few hundred genes whose levels of expression had previously been found to either increase or decrease with aging. From this information, they compiled a chart of what they called "differential aging" denoting the difference between someone's true or chronological brain age compared with an apparent brain age.

One gene, TMEM106B, popped out of the data as a genetic driver of differential aging. TMEM106B appears to control inflammation and neuronal loss in the brain. There are two forms of the gene, or alleles: One form is associated with an increased rate, or risk, of brain aging, and the other allele is protective and is thought to prevent such an acceleration of aging.

In the same study, Rhinn and Abeliovich also looked at the brains of people who had been affected by Alzheimer's disease and/or Huntington's disease during their lives, and they observed the same effect of TMEM106B on brain aging in those people.

"TMEM106B begins to exert its effect once people reach age 65," Abeliovich said. "Until then, everybody's in the same boat, and then there's some yet-to-be-defined stress that kicks in. If you have two good copies of the gene, you respond well to that stress. If you have two bad copies, your brain ages quickly."

TMEM106B may be an attractive target for researchers hoping to create treatments that could slow down brain aging, although such therapies would take many years to develop, the researchers said.